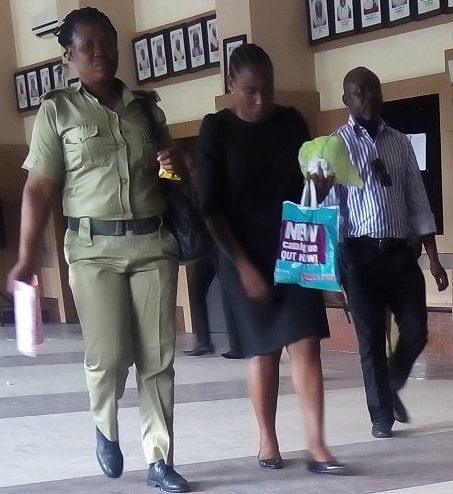 An High Court in Igbosere Lagos today  heard a bone chilling account account of how a lawyer, Udeme Otike-Odibi, allegedly killed her lawyer husband Symphorosa Otike-Odibi and severed his penis.

A prosecution witness, Mr Olusegun Bamidele, told Justice Adedayo Akintoye that Udeme, 48, whacked Symphorosa on the head with a frying pan several times before stabbing him on the stomach with a kitchen knife.

Still furious, she sat beside his corpse on the bed and said: “‘If this your penis is the one that is giving you license not to have the feeling of another person, it is better we cut it off.”

Udeme then severed the penis before putting a piece of it in his right hand.

His testimony followed Udeme’s June 13 arraignment on a two-count charge of murder and misconduct with regard to a corpse, by Lagos State Director of Public Prosecutions (DPP), Titilayo Shitta-Bey.

The government accused the defendant of stabbing Symphorosa, also a lawyer, to death and mutilating his corpse by cutting off his genitals, on May 3 at their Diamond Estate, Sangotedo, Lekki, Lagos home.

Shitta-Bey said the offences contravened sections 165 (b) and 223 of the Criminal Law of Lagos State, 2015.

Udeme pleaded “not guilty”, following which she was remanded in prison custody.

At the resumption of trial on Wednesday, Shitta-Bey called Bamidele, a 30-year police veteran, as the state’s final witness.

Bamidele told the court that he was the head of a team that investigated the killing and that he personally recorded the defendant’s statement.

He said the second time he met Udeme, she had been moved from Safeway Hospital in Lekki to protective police custody at a police hospital at Ikeja.

It was there, he said, during an interactive session, that Udeme wrote a detailed confessional statement.

She said the defendant was recuperating from what one of the doctors that attended to her described as “superficial and self-inflicted wounds,” but that she spoke freely after identifying herself as a lawyer.

“While she (Udeme) was writing her statement, it was an interactive session. I put questions to her, she would explain it to me and put it down in writing.

“She stated in her statement that she was married to the late Symphorosa and that they were having marital issues.

“She stated that the deceased was having extra-marital affairs and whenever she raised the issue with him, his responses were not satisfactory; he appeared nonchalant. 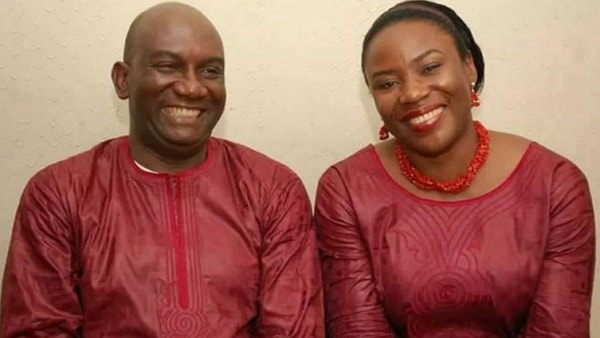 “She said also in the statement that on the second of May 2018, she was preparing to travel to the United Kingdom. She checked the bedside locker for her marriage certificate.

“When she could not find it, she went to the deceased where he lay on the bed and asked him about it but there was no response, the response given was not okay.

“She had a discussion with him and there was hot exchange of words, which made her to go to the kitchen and get a frying pan and knife.

“When she returned to where the deceased lay, she hit him on the head with the frying pan and said ‘Tell me, what is in your mind that you are withholding.’

“She stated that the deceased called his mother to report her conduct.

“She continued to hit the deceased on the head again and again. Finally, she confirmed that she used the knife to stab the deceased in his abdomen.

“She also said while the deceased was lying on his back, she was still angry. She sat beside him, looking at his intestines coming out of the deceased and said: ‘If this your penis is the one that is giving you license not to have the feeling of another person, it’s better we cut it off,’ and she proceeded to do so with the same knife she used in stabbing him and hanged a piece of the penis in his right hand.’”

Prompted by Shitta-Bey, Bamidele explained that later that night, Udeme sent her “close friend” Maureen Offor, a WhatsApp message which read: “I have done something terrible.”

The witness said further investigation showed that she sent two other WhatsApp message, firstly to the husband of the deceased’s younger sister, Charles Akpoguma, which read: “Just pray for us. May God forgive.”

The last one was to her mother in Calabar the same night. It read: “Sorry mum, we engaged in a fight.”

Her mum tried and failed to call her back, Bamidele said.

A few minutes later, Udeme called back and said: “Don’t disturb my life, let my phone free so I can receive calls from the ambulance.”

Then she cut the call.

Things took a more graphic turn when the prosecution played pictures of the defendant on a hospital bed after the incident and her bloodied deceased husband on his deathbed.

Udeme looked straight in front of her from where she sat in the dock while the amplified pictures were displayed on a wall to her right.

They included a big, shiny frying pan allegedly used by the defendant on the deceased, a blood-covered kitchen knife Udeme allegedly used in killing Symphorosa, a bloodstained pen, four phones, two of which were bloodstained, Udeme’s Nigerian and British passports.

But when Shitta-Bey sought to tender the two statements Udeme allegedly made to the police, her counsel, Mr Olusegun Banjoko, opposed her.

Banjoko, after showing the statements to his client, prayed the court not to admit both, on the ground, among others, that they were made without her lawyer being present, as required by law.

Justice Akintoye adjourned till February 25 to consider the admissibility of the statements in a trial within trial.