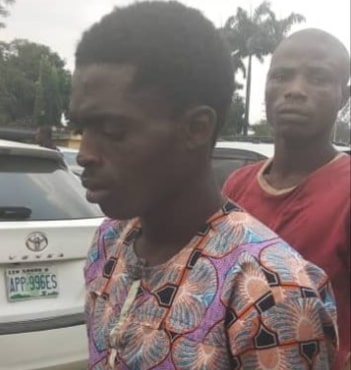 Lagos SARS operatives on Tuesday said it had arrested suspected robbers, who shot and killed a mother of four at the Iju-Ishaga area of the state.

The alleged robbers, Isah Shobayo and Ogundimu Olalekan, invaded the home of Mr. Akin and his wife, Modupe, and held them hostage at gunpoint.

The state Commissioner of Police, Imohimi Edgal, explained that at the time of the incident, the couple’s children were in the church for the cross-over service.

Edgal said that the deceased stood between the robbers and her husband, pleading with them not to kill him.

“Unfortunately for the woman, one of the robbers pulled the trigger and shot her at close range on the chest. The suspects made away with the couple’s phones, laptops and a cash of N2,200.

“After the incident, operatives of SARS visited the scene and gathered items of evidential importance, which were carefully analysed. This finally led to the arrest of the suspects. During interrogation, one of the suspects, who gave his name as Shobayo, confessed to committing the crime. He later led the detectives to arrest Olalekan, who served as their armourer.”