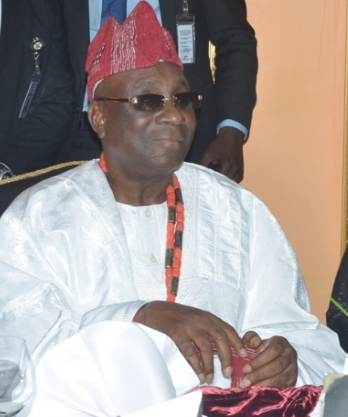 May 22, 2017 – Lagos King Oba Rilwan Akiolu Appears In Court Over Suit Challenging His Entitlement To The Throne

About 14 years after his installation, the Oba of Lagos, Rilwan Akiolu, on Monday appeared in an Ikeja High Court in a suit challenging his emergence as the paramount ruler of Lagos, saying he is the bona fide monarch.

“I am here to justify my appointment, you cannot build something on nothing, it will be broken.

“By native law and customs and by law, I am the bona fide Oba of Lagos,” said Akiolu, who was accompanied to the court by 10 white cap chiefs.

The NAN reports that Akiolu’s installation as the Oba of Lagos is being challenged by Prince Adedoyin Adebiyi and Prince Rasheed Modile, two members of the Lagos royal family.

Joined as respondents in the suit are the state governor, the Attorney-General of Lagos State, Prince Babatunde Akitoye and Chief Junaid Eko.

Both Adebiyi and Modile are claiming that Akiolu is not entitled to the throne because he is not a member of a ruling royal family by not being a direct descendant of Oba Ado, the first Oba of Lagos.

According to the claimants, only members of the Ologun Kutere and Akinsemoyin ruling houses are entitled to the throne.

They also alleged that proper customary rules and procedures were not followed when he was appointed as Oba in May 2003.

While being led in evidence by his lawyer, Mr Adetokunbo Mumuni, Akiolu told the court the procedure he followed before being installed.

“After I made my intention known to my family that I wanted to be Oba of Lagos, I applied for the throne.

“In May 2003, the head of the kingmakers and the then Sole Administrator of Lagos Island Council called at my residence.

“At that time I was preparing to go to the mosque and I was told that I received a letter from the state government and the State Executive Council.

“The letter accepted my nomination that I have been approved to be a worthy successor of the late Oba of Lagos.

“By the grace of Almighty Allah, there is nothing like rotation in the succession to the throne of Oba of Lagos,” Akiolu said.

Before cross-examining Akiolu, lawyer to the claimants, Mr Babatunde Fashanu (SAN), told the court that for the purpose of the trial, Akiolu should be addressed as the defendant and not as the Oba of Lagos while in court.

“I apply that all referrals to the defendant as the Oba of Lagos should be expunged from the records of this honourable court.

“Within the walls of this courtroom, he is a defendant and when we step out of the courtroom, I will lie down and greet him as ‘kabiyesi’ because I am like a son to him,” he said.

Akiolu also told the court that he had a prior relationship with Fashanu’s father when he was working as a lawyer during his early years of legal practice 32 years ago..

“I know your father, I used to carry files for him when we were working together.”

Fashanu’s request to expunge referrals of Akiolu as Oba of Lagos was, however, not granted by the court.

In responding to Fashanu’s question whether proper customary procedure was followed when he became Oba, Akiolu said he was installed according to the customs of Lagos as Oba by kingmakers.

“Akiolu is a direct descendant of Oba Ologun Kutere, there is no registered declaration for the throne.

“It is the old customs and the recommendations of the Price Commission which is over 100 years ago that is still valid till today.”

Akiolu also debunked claims that Akiolu royal family was not one of the ruling houses because it was non-existent.

He said:“Despite the letter from Lagos State Government confirming my appointment as Oba and stating that I am from the Akiolu royal family, I want to make it clear that a royal family and ruling house means the same thing.

“My appointment as the king is the first time in history that kingmakers will be unanimous in selecting an Oba of Lagos.”

Justice A. Candide-Johnson adjourned the case until June 19 for continuation of trial.