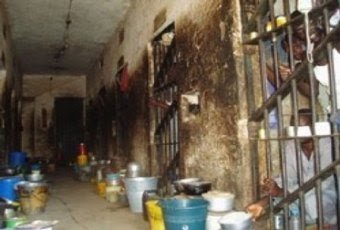 I got an information from some of the inmates that they are being starved by the above named woman incharge. I was told that inmates slumps almost everyday, there was one that happend on sat 30th march 20013, some of the inmates died because of hunger.

The women and babies are falling sick due to inadequate feeding, i was also told that the inmates are eating rotten food because of hunger.

There was a time the inmates called her attention to dialogue with her, just like a mother. instead what she did was to tell the controller that the inmates want to riot in the prison yard, so because of her lies the police and soldier were called to guard the prison yard. sometimes the inmates are warned to pretend that everything is fine when the NGOS are around and after they leave they begin to starve them again.

Please these inmates need your help before they all starve to death, especially the mothers and babies. If you want to find out about what am saying speak to the inmates and not to the controller, warder or the woman incharge.

Please helps us talk to the government to come to their aide before people start dying like chicken.

I will appreciate it if my identity is kept unknown because i don’t want trouble.

Thanks and God bless u and your families as you come to their aide.

Article by an anonymous insider.