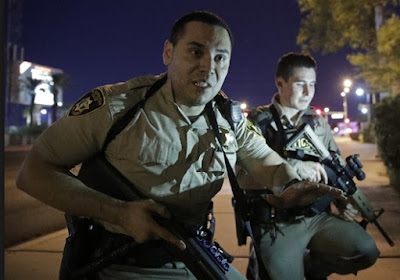 At least 50 people are dead and more than 100 others injured after a shooting near the Las Vegas Mandalay Bay hotel, police said Monday during a press conference.

The main suspect started firing an automatic rifle from the 32nd floor of the Mandalay Bay hotel at 10:08 pm (0708 GMT) at a crowd of people watching an outdoor music festival during a performance by country singer Jason Aldean, Sherriff Joe Lombardo said.

The shots continued for more than a minute, with hundreds of people taking cover and trying to escape the scene. 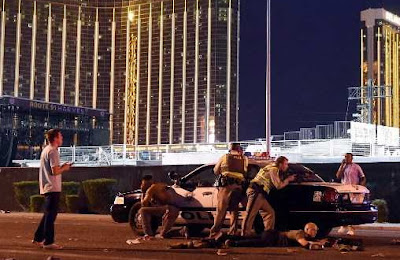 The perpetrator, identified as a local resident, was shot and killed by police in the hotel room shortly afterwards, Lombardo added.

Though US authorities believe the perpetrator was a “sole actor,” Lombardo said that police were also searching for Mari Lou Danley, identified as an Asian woman who was with the suspect at the time of the attack.

A witness at the event told dpa she heard multiple gunshots before fleeing, and said she “crawled over dead people” as she tried to get away.

Lombardo said that several off-duty police officers had been attending the country music festival and that at least two had been killed in the incident.

He added that, despite the “confusion and hysteria” in the wake of the shooting, reports about multiple shootings cannot be confirmed.

Earlier, at least two people were killed and 24 were hospitalized after a shooting at a country music festival on the Las Vegas Strip, a local hospital spokeswoman said.

The police said one suspect was down.

Witnesses on social media said the shooting broke out on the last night of the three-day Route 91 Harvest festival, a sold-out event attended by thousands and featuring top acts such as Eric Church, Sam Hunt and Jason Aldean.

U.S. media, including Fox News, reported that Aldean was performing on Sunday night when the rampage began but that he had been bundled safely off stage at the event outside the Mandalay Bay Resort and Casino in the Nevada gambling mecca.

The spokeswoman for the University Medical Centre hospital said 14 of the wounded were in a critical condition.

“Confirming that one suspect is down. This is an active investigation. Again, please do not head down to the Strip at this time,” Las Vegas Metropolitan Police Department said on Twitter.

It was not immediately clear whether the suspect was killed or injured. Police said on Twitter that at this time they did not believe there are any more shooters.

Video on the festival’s website showed stage set up outside the front of the Mandalay Bay.

The hotel is near McCarran International Airport, which said on Twitter it had temporarily halted flights after the shooting.

Later, the airport said that some flights had resumed.

One Twitter user posted that the casino hotel was on lockdown, while another, citing police scanners, said two gunmen who had shot at a bodyguard and police were on the 32nd floor, although there was no confirmation from police.

Video clips posted online showed what sounded like automatic weapons as panicked concertgoers fled or dropped to the ground screaming.

Witnesses heard numerous gunshots at the hotel, where police tactical teams were searching for the attacker, according to reports on CNN and in the New York Times. (Reuters/NAN)

Continue Reading
You may also like...
Related Topics:las, shooting, vegas