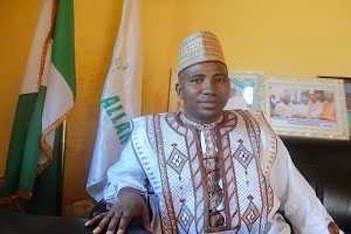 Nov 19, 2014 – Leader Of Fulanis In Nigeria Suspended For Endorsing Jonathan For 2nd Term

The umbrella body of all Fulanis in Nigeria, the Miyetti Allah Kautal Hore, has suspended its national chairman, Alhaji Bello Abdullahi Bodejo, over his alleged involvement in politics.

In a communique signed by Alhaji Wakili Ali Babangida, and issued at the end of a meeting of the body in Kano, conveyed Bodejo’s suspension.

State chairmen, secretaries as well as members from 30 states of the federation attended the meeting.
The association flayed the national leadership of the association under Alhaji Bodejo for failing to organize election, four years after registration of the association.
It noted that the action was against the provisions of its constitution, which stipulates that elections should be held after every three years.

The group also condemned the involvement of its national chairman in partisan politics; the recent being his endorsement of President Goodluck Jonathan’s second term ambition.
The association said the action caused it and indeed all Fulanis across the nation serious embarrassment.

A five-man committee was also set up under the chairmanship of Alhaji Lawal Ali Mai Mamman to investigate the accusations against Bodejo.

The committee was given one month to submit its report and recommendations.

Interim national caretaker executives under the leadership of Dr Ibrahim Abdullahi was constituted to manage the affairs of the association pending the outcome of the committee’s investigation.

Continue Reading
You may also like...
Related Topics:Fulani, jonathan, leader