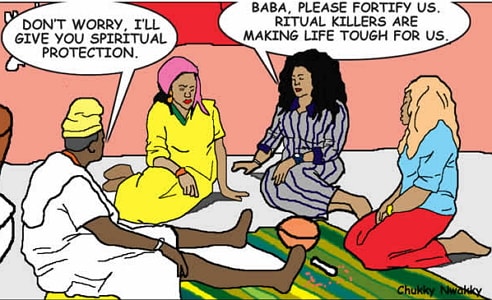 Resorting to selling their bodies for a fee as the last hope of survival in an increasingly hostile economy, many commercial sex workers have become easy targets for thieves, kidnappers and ritual killers across the country these days, sending fear and serious panic throughout the infamous industry. Difficult to identify through physical appearance, these ‘predators’ have come in various forms, devising all sorts of means to get their ‘preys’. [NG]

For example, last week, a young sex worker from Kogi State, Mercy Moses, lost her life to ritual killers in Azuri-Okene, Adavi Local Government Area, after being lured out of the hotel she operated in the community. Led by one Pastor Otaru Olusegun, the gang, including Yakubu Abdulmuminu and Samuel Olusegun, slept with the young lady several times before dismembering her body and burying some parts under the altar inside the Voice of Canaan Church belonging to the clergy. While confessing to the crime, the pastor claimed that poverty led him into it, revealing that he had hoped to raise around N2.5m from the ritual before he was arrested.

In March 2016, a 35-year-old sex worker in Abuja was found dead in her hotel room a few hours after one of her rich clients visited. It was discovered that her clitoris had been cut off when her body was examined closely by colleagues. The said customer has never been seen around the place again.

In August 2015, a 23-year-old sex worker known as Sitira was murdered in Abeokuta, Ogun State, by suspected ritual killers and her remains dumped at a refuse site. According to an eyewitness, the body was thrown out of a moving Sport Utility Vehicle in the early hours of that fateful day. Angered by that incident, commercial sex workers in the city embarked on a massive protest to vent their frustration at the growing number of similar attacks against their colleagues in the area. While calling for police protection, they vowed to match any ritualist fire for fire.

“I have vowed that nothing would make me follow any customer home again,” one enraged sex worker, said. “It’s either the men follow me to where I stay or we go to a hotel. Any ritual killer, who attempts to take my life, will be punished. If he thinks that I am a prostitute and have no worth, I am going to make sure he does not live to tell his own story. They should come with their charms, we will deal with them,” she added.

Though no accurate data to reveal the frequency of the crisis, dozens of prostitutes in different parts of Nigeria have lost their lives this year after crossing paths with ritual killers disguising as customers in need of paid sex.

One young lady in the business, who told Saturday PUNCH that she was forced to embrace prostitution after failing to find a job with which to support herself and further her studies after completing her National Diploma from a polytechnic in Kwara State, said that apart from using her instincts to detect customers, who could be a threat to her safety, she has decided to fortify herself spiritually to avoid falling into the hands of ritual killers.

“It is difficult to identify the bad ones from mere looks because people have mastered the art of deception over the years,” the lady, who identified herself only as Deola, said. “I have always relied on instinct to guide myself but with what is happening all around the country today, it is very difficult and dangerous to do so. Since this is the only job I do, I have decided to fortify myself spiritually so as to further protect myself against bad guys especially those that see us as easy targets for ritual purposes.

“This job is full of dangers and so one has to be very sharp and smart. As it is, instinct alone won’t work, so one has to be smart and do everything possible to get protection,” she stated.

While narrating what the experience has been operating as a commercial sex worker for about eight years, a young lady, who claims to be from Bayelsa State and named Precious, said that if not for the protective incisions on her body, she would have been used for rituals by two men posing as customers. According to her, she had to jump out of the speeding vehicle of the men when it appeared as the only option left.

“I am lucky to still be alive today because the experience I had last November with ritual killers posing as clients was terrible,” she stated. “There was a night I stood outside the hotel we operate with other girls in search of customers. I didn’t know that the guys that picked me up for the night were fake. Immediately we got inside the car, one of them sprayed something like air freshener and I slept off. Luckily for me I woke up in time before they diverted the car into a bush from the express. I had to summon courage to jump out of the vehicle. If not for God, maybe I could have been killed by the other cars coming behind. I sustained serious injury as a result of that incident.

“Since that period, I have resorted to attending to clients in the hotel we operate. I only go out with the ones I met through close links. At least those ones can be easily traced if anything happens.

“Apart from the incisions on my body, I have met a strong prayer man that has been organising spiritual protection for me. One just has to protect herself on this job,” she said.

Daniela, yet another young lady in the profession of exchanging sex for money, said that apart from also getting spiritual protection to avoid falling into the hands of ritual killers these days, she watches out for certain behaviours, which then alert her to potential danger.

“Whenever I get a customer and he offers to give me amounts like N200, 000 for a night, I run for my life. “That kind of amount is too exorbitant, there must be more he wants to collect from me other than sexual satisfaction.

“Also, as a way of protecting ourselves, we always tell ourselves about the clients we are going to see especially if we notice the person is into fraudulent practices.

“For example, if I have a client tomorrow, I usually drop his name, contact address, phone number and picture with my friends just to be on a safe side. It is all part of the ways we are protecting ourselves because these ritual killers are not resting. They are coming up with all sorts of means to get us,” she said.

A top member of the National Association of Nigerian Prostitutes, who identified herself only as Nikky said that their job is just like any other important one in the society, therefore they must be treated with respect and dignity by clients. According to the lady, who said they would continue to engage security agencies and the government in general for the protection of their members, they would employ all sorts of safety measures, including applying spiritual solution, to guard themselves against ritual killers.

“What we provide in the society is an essential service, so nobody should look down on us. In other societies, sex workers are respected but here they are rubbished anyhow. As if that is not enough, we have now become easy targets for ritual killers. We will not allow that.”

“Already we have sent out a message to security agencies and the government to protect us against evil people but if nothing is done, we will look at other means including spiritual to keep ourselves safe. We are professionals, we will not allow anybody or group scare us out of existence,” she added.