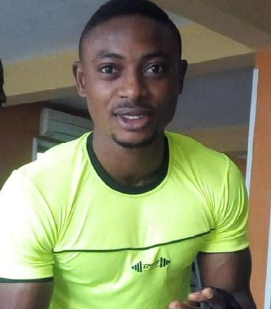 A new graduate of Yaba College of Technology in Yaba Lagos has ended his own life.

The man identified as Muyiwa Oluwagbemileke took his own life today shortly after sharing his mum’s cell phone number and a very confusing post on his official Facebook page @oluwamuyiwa.o.samuel. 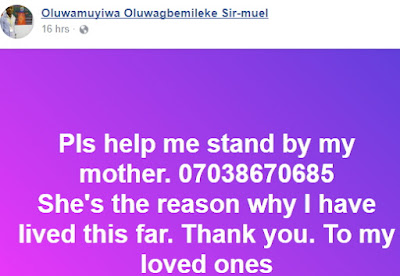 Though he didn”t reveal the cause of his suspicious action, but friends are of the opinion that he died of heartbreak and loneliness.

Friends and family members haven’t stopped asking why he took his own life in such manner.

Odedeji Harbideymie wrote:
Muyiwa…….despite the love and the closeness we shared,you could not still confide in me to tell me what you were going through that made you think about committing suicide,despite the promises you made that you were never going to hide or keep things from me…..you have not done well at all,I just wish you can wake up nw and read the disappointment of pple in you for choosing to take your own life.But God knows best sha,Ewa will forever miss you.RIP

Prince Adekunle Ayomikun Ogunmokun wrote:
Your demise didn’t just come to me as a shock but the circumstances by which you died left me speechless. Muyiwa! why did you choose to commit suicide, when no condition is permanent. I knew the selfless role you played during my regime as Naoss President.

You do call me my handsome President while i call you Mr Finest. The Muyiwa i knew back then in Poly Ibadan will never hurt an ant not to talk of committing suicide. The reasons you decided to end your own life is best known to God. May God console your family. You will be greatly missed my comrade.

Oluwadamilare Oloyede wrote:
Am speechless and sad, why Muyiwa. You help, console, give, but why did you choose to take your own life?? Am so sad… Rip

Alex Teflonondon wrote
why?? dude why would you take your own life..how could you do such a thing to all of us…i am not going to miss you because what you did was so stupid and wicked..no matter what you were going through you could have just opened up to sombody and not taking your own life..rip dude ..thanks for putting your family into sorrow

Oke Idowu Elizabeth wrote:
SUICIDE IS NOT THE SOLUTION TO WHATEVER YOU ARE GOING THROUGH. TALK TO SOMEONE. YOU MAY HAVE A CHANGE OF MIND FOR GOOD. RIP Oluwamuyiwa Oluwagbemileke Sir-muel — feeling sad.

SARS Policemen Arrest 5 Kidnappers Alive, Kill Them At Station In Cross River State Without Prosecution
Nigerian Man Who Disguised As Woman To Get Job Arrested In Niger State As Dress Fell Off His Body