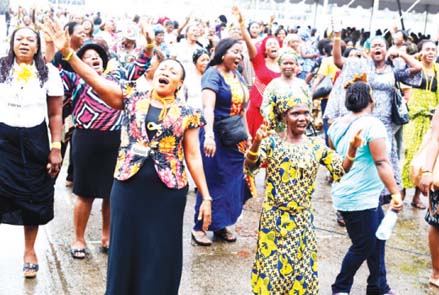 A man identified as Osayande Ekhator has died under a mysterious circumstance during a deliverance service at the Holy Ghost Deliverance Center aka Hope Ministry in Edo state.

The 45-year-old mentally unstable man gave up the ghost while he was being forcefully delivered at the Pentecostal church located at Uselu Quarters in Egor LGA of Edo.

Members of the victims family alleged that he was beaten to death. They said there was blood stains on his head when his lifeless body was being carried into a vehicle.

The victim’s father, Pa Ekhator said his late son’s hands and legs were tied and that he was thrown to the ground during the spiritual cleansing.

“They forced‎ him and tied him as usual and threw him down. From there, they carried a bucket full of water and poured it on his body.” – said Pa Ekhator

“‎They beat him to death. They removed the clothed he came with, bathe him and wear another clothe on him. “They said that they wanted to take him to a mortuary. But we refused.” – said the sister of the victim

Some youths in the area reportedly invaded the church and destroyed it after the incident.