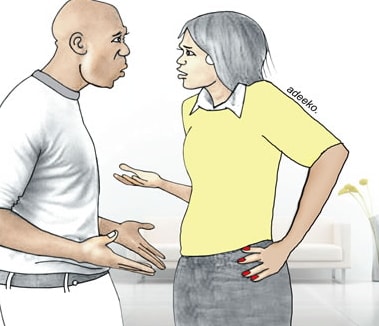 Man Arrested For Illegal Gun Possession In Benin After Wife Reported Him To Police Claims Innocence, Says Wife Sets Him Up

A man identified as Ese Aibangbe has been arrested by Police in Edo for illegal possession of gun after his wife, Joy reported him to police.

His wife reportedly told the police that her husband goes out with the gun every night after he threatened to deal with her for returning home drunk.

42-year-old Ese who was paraded by the police said he got married to the woman in 2016 and that they were yet to have children.

He denied threatening to shoot his wife even as a he agreed that he does not have any license to own a gun.

“It was my wife that set me up. She came back home one day and was drunk. It was about 9:30pm. I quarreled with her on why she came home late when I have not eaten.

“She started insulting me and I slapped her. She slapped me back. I was surprised she went to tell the police that I have a gun.”

“I was using that gun as a vigilante in my community and not for robbery. I don’t have a license for the gun. The reason I did not return the gun when police asked people to do so was that I did not hear about it.

“I will forgive my wife if I got out of this mess. I do community work and I am not a criminal.”

The State Commissioner of Police, Babatunde Kokumo, told newsmen that the man will be charged to court because his wife said he used the gun to hustle.