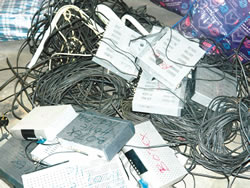 Obot is said to have installed the DSTV signals to different homes for N5,000 and charged N1,000 per month as subscription fee.
Uyo Liaison Officer, NCC, Mr. Amudipe Charles, who represented the Director-General, NCC, Mr. Afam Ezekude, told journalists in Uyo on Monday that Obot was arrested with the equipment he used to transmit the cable television signals illegally.

“Illegal transmitting decoders, transmission boosters, rolls of installation wires, and other accessories worth N20m were impounded during the raid at two different locations. The locations are No. 89 Atan Road, 32 Umuahia Road, Ikot Ekpene, Akwa Ibom State.

“Investigation into the case continues and appropriate action will be taken on conclusion of investigation.”

He stated that Obot, who operated as Botex Integrated Service, was arrested based on intelligence and surveillance reports during an anti-piracy operation.