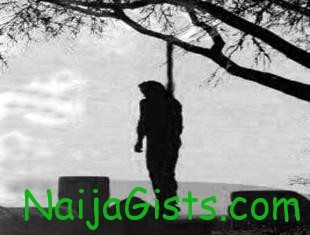 According to News Agency of Nigeria report, A 45-years old man, Dare Amoo, who works as a driver and hails from Idigba Compound in Oke-Ose, Ilorin East Local Government Area of Kwara, on Sunday committed suicide by hanging. naijagists.com

The News Agency of Nigeria (NAN) learnt that the deceased, a father of six, told his wife after the early morning Muslim prayer that he was going to the toilet.

The woman, who expected her husband to come out of the toilet after some minutes, reportedly attempted to open the toilet’s door that was firmly locked.

NAN gathered that she consequently raised an alarm which attracted other members of the family and neighbours to the scene.

“When the toilet’s door was eventually forced opened, the man was found with a rope around his neck that was tied to the window’s burglary-proof,’’ an eyewitness told NAN.

The witness, who preferred anonymity, said that efforts to revive Amoo proved abortive, as he was later confirmed dead by doctors at the University of Ilorin Teaching Hospital (UITH).

However, Mrs Nike Amoo, wife of the deceased, told NAN that her husband was not sick, while he was not indebted to anybody.

She said that she could not understand the motive behind her husband’s suicide.

Mr Ezekiel Dabo, the Police Public Relations Officer in Kwara, confirmed the suicide case to NAN in a telephone interview.

He said that the corpse had been removed and deposited at UITH for autopsy, adding that the police had commenced investigations into the matter.