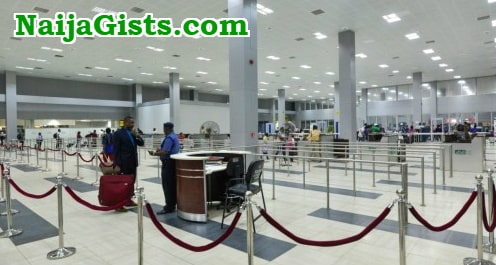 A man  scheduled to travel out of the country on Wednesday morning slumped and died at the Murtala Muhammed International Airport, Lagos.

According to eyewitnesses, the deceased, identified as Ademola Adeleke, had yet to check in when the incident occurred.

It was gathered that the passenger, who arrived at the airport early in the morning for his flight, slumped and started gasping for breath at about 5.30am.

He was said to have received help from a passenger who tried to revive him by pumping his chest before Port Health officials arrived.

An eyewitness however stated that Adeleke did not respond to treatment even after the health officials tried to revive him by giving him oxygen.

The Federal Airports Authority of Nigeria’s ambulance arrived at the scene later, and took him to the Lagos State University Teaching Hospital, where he was confirmed dead.

The General Manager, Corporate Communications, FAAN, Mrs Henrietta Yakubu, confirmed the incident, saying the passenger slumped as soon as he stepped into the terminal.

She said he was later taken to the hospital where he was confirmed dead.

She said, “It was so sad. He was probably going for medical check-up before he slumped and died, so we could not confirm which of the flights he was supposed to join.”