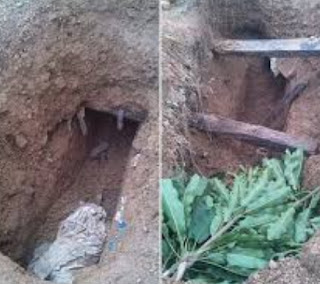 Feb 27, 2018 – Man Digs Grave Of Sister Buried 50 Year Ago In Ekiti State, Exhumes Her Bones In Attempt To Use Grave To Bury Late  Wife

A 75 year old man who dug the grave of his sister Folawemo Luiz who was buried 50 years ago in Ekiti state appeared in court today for the continuation of his trial.

The accused Daramola Luiz reportedly exhumed the bones of his sister in Ise/Orun LGA of Ekiti state on the 21st of June 2016 in order to bury his late wife in the same grave.

He was arrested by family members who caught him performing the act and took him to the police station.

His case has been dragging for a while after he promised to settle the matter amicably but it didn’t work out.

He appeared before an Ado Ekiti Chief Magistrates’ court today where he was granted bail of N100,000 with two sureties in like sum.

The Magistrate, Modupe Afeniforo adjourned the case until the 19th of March for further hearing.