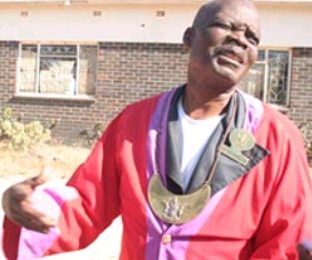 A man identified as Simon Matsvara is currently running for his life after he allegedly impregnated his mother, Ethel Vhangare twice within 5 years in Pote Village, Mashonaland, Zimbabwe. naijagists.com

Ethel Vhangare, the mother of the accused has also fled the village after the news reach their church members.

We learnt Ethel suffered miscarriage after her first pregnancy for her son 4 years ago before this conception.

According to the village head, chief Chinambora, Pote community indigenes are very outraged by this development.

“We will hunt the two and we will severely punish them sending a clear message to potential offenders that we will not tolerate these acts,” Chinambora told a Zimbabwean newspaper.

Simon and her mother, Ethel began their relationship in 2008 after Ethel husband, Agripha who is now late fell ill.

During Agripha’s illness, Ethel got pregnant for her son and the community later fined her and warned her to end the incestuous relationship with her son.

After the second pregnancy, Ethel began skipping church activities which prompted the caring church members to visit her at home.

It was at her home that they found out she is 5 months pregnant for her own son.

Ethel and her son Simon are currently on the run.