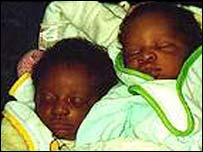 July 14, 2013 – Man Kills Wife Who Refused To Breastfeed Twin Babies In Edo State At His Command

A man identified as Endurance Enadeba, has allegedly killed his wife in Benin during an argument on breastfeeding of their newborn set of twins. The incident happened in Upper Sakponba area of Benin, as the couple was preparing for the naming ceremony of their twins.

The tragedy followed an argument on when the woman identified as Osarumwense should breastfeed the babies. According to eyewitnesses, the couple celebrated the birth of the twins last Sunday and was preparing for the naming ceremony when the tragedy occurred.

The husband, Endurance Enadeba, was said to have hit the wife on the head with an object, which resulted in her death.  He was said to have requested the wife to breastfeed the babies who were crying, but the woman reportedly said she wanted to urinate first.

The witnesses said the husband went to where the wife was to urinate, and a fracas ensued, which led to the man hitting the wife on the head. Father of the deceased woman, who gave his name as Eghenayayore, was seen weeping, and cursing profusely over the corpse.

He explained that his daughter called to inform him about the incident, but that she died before they rushed her to the hospital, adding that the husband fled when the wife collapsed. “He killed my daughter because of breastfeeding the twins. The twins are at home now, who will give them breastmilk? Why did he kill my young daughter? This girl was born in 1996. We were preparing to name the babies tomorrow, because it was their first issue,” Eghenayayore said.

When contacted, Edo Police Command Spokesman, DSP Moses Eguavoen confirmed the incident and said the husband has been arrested from where he was hiding.