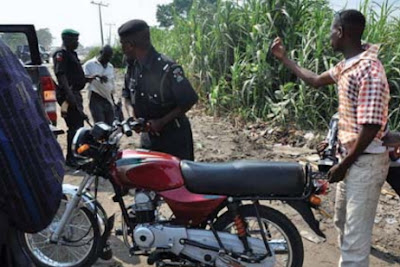 A mild confusion took over today in Agbado Ekiti in Gbonyin Local Government Area of Ekiti State when a commercial motorcycle (Okada) operator was allegedly killed on a farm.

The suspected killer, identified simply as Toyin, was said to have hired the service of the victim to convey him to his farm on Ode Road.

The suspect allegedly overpowered the victim and hanged him with a rope before attempting to bury the body in a shallow grave.

The screams of the victim were said to have attracted workers in a nearby factory who raised the alarm and arrested the suspect.

It was unclear last night what caused the killing.

It could also not be ascertained if there was quarrel between the duo.

The deceased was said to have left behind a heavily pregnant wife.

“Toyin was said to have gone to the terminal of the commercial motorbike operators in Agbado this morning and engaged the service of his victim to convey him to his farm, located in front of the shoemaking factory of the popular politician and former senator, Gbenga Aluko.

“People who were at the factory told us that they learnt of the incident when they heard agonising cry of Toyin’s victim repeatedly and decided to check up what had happened.

“It was then they allegedly met Toyin throwing the body of his victim into the freshly dug hole. He was apprehended and handed over to the nearest police station in the area.

“The police have arrested Toyin with the body taken to their station.”