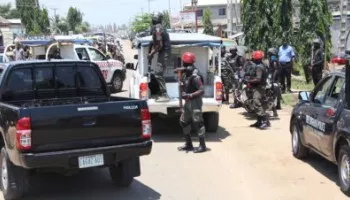 A killer husband has been declared wanted in Ikorodu.

The suspect, Omolaja Shodipo allegedly stabbed his wife to death in their bungalow in Ikorodu yesterday before his strange behaviour caught the attention of neighbours who rushed to their apartment where where they found the lifeless body of his wife.

While his neighbors were peeping into the house, Shodipo allegedly fled for cover.

The vigilant neighbors immediately called Police officials at Owutu station who came over to evacuate the corpse.

Police found a cutlass on the bloody scene of the murder but no blood was seen on the cutlass.

Police later did a quick search of the whole house  and found no weapon.

The corpse had been taken to Ikorodu General Hospital morgue as police launched a manhunt for the fleeing suspect.