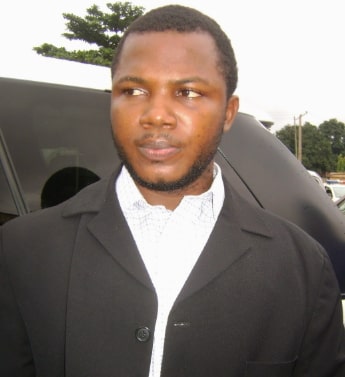 Kelechukwu Chukwuanugo, a murder suspect today told a Lagos High Court in Igbosere that he strangled his girlfriend, Lizzy Nzewi, to death by mistake during a struggle for her phone.

37-year-old Chukwuanugo, in tears, told Justice Adedayo Akintoye that he loved Nzewi and had no intention of killing her.

The defendant spoke while opening his defence to a one-count charge of murder preferred against him by the Lagos State Government.

He said the offence contravened Section 221 of the Criminal Law of Lagos State, 2011.

The defendant pleaded not guilty, following which he was remanded in prison custody.

During trial, the court heard that Chukwuanugo fled and was arrested at the border between Ghana and Cote D’Ivore by operatives from Nigeria and the International Police (INTERPOL) while fleeing with the deceased’s Range Rover Sports Utility Vehicle, SUV.

The state called five witnesses, following which it closed its case.

At the resumption of hearing Tuesday, Chukwuanugo was led in evidence by his counsel, C. J. Jiakponna.

The defendant narrated how he met Nzewi, a divorcee mother of four in Ghana sometime in 2012 and how they became lovers.

He said Nzewi helped him to obtain an International passport and a driver’s licence which both bore a name similar to hers, to make it look like they were husband and wife.

Chukwuanugo told the court that he even took Nzewi to his village once, adding that they attended clubs together.

“On the day of incident, the deceased went out and stayed out till midnight and did not answer any of my phone calls.

“She came back drunk, playing loud music in her car. I took her and her belongings inside the house.

“I told her to take her bathe because she smelled so bad. As she went inside the bathroom. I called her phone to check if it was actually on silent but the phone rang out.

“She came out to answer the call but found out I was the one calling.

“After some time, the phone rang again, a man’s picture showed. I picked it and the man said ‘Baby are you home?’

“She came out, tried to snatch the phone from me. We started quarreling and struggling with the phone.

“She held my manhood so hard and I tried to free myself then held her neck.

“The wine on the table which I was drinking poured on the floor, we slipped and fell. I saw that I was bleeding so I entered the bathroom to cleanup.

“When I came out, she was still lying on the floor motionless. I shifted her and saw that she was already foaming from the mouth.

“I didn’t know what to do, so, I took the key to the car, an ATM card and ran away,” Chukwuanugo said.

The defendant said when he was arrested, he was taken to a hospital for treatment.

His lawyer, Jiakponna, made an application to the court to allow him subpoena (summon) the hospital to come and testify.

He also asked the court to allow him apply to the police to produce the defendant’s International passport, drivers’ licence and the ATM card seized from the defendant.

At the conclusion of proceedings, Justice Akintoye adjourned till May 10 for further hearing.