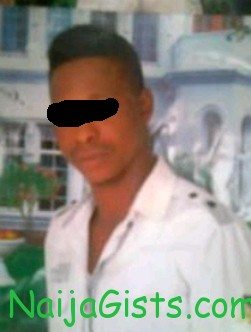 When Peace Asugwo a teenage mother willingly accepted to marry an Abuja based driver out desperation and frustration, she never had inkling of what would behalf her and her one month old baby in less than one week after their marriage.

Peace, an orphan who hails from Agwa Village in Oguta Local Government Area of Imo State was impregnated by her boyfriend, one Johnson, thus regarded by her grandmother as a disgrace to the family. Luckily for her, Mr. Kingsley Linus, a driver based in Abuja was eager to marry her regardless of the fact that even though at 16 years, she already had a month-old baby boy.

After he met with her family and the necessary marital rites were performed, Peace, the young bride, happily followed her new husband to Abuja to start a new life.

According to the 16-year old, who was later rescued from the hands of her kidnapper husband, it was a twist of stories when they got Abuja and he lodged her in a hotel in Kubwa, claiming that he had lost the keys to his house and would have to get someone to break the door in the morning.

“Few days later, he introduced a nurse, one Mrs. Martina Onwelikwe, to me as his elder sister who would take care of the infant. Eager to please my in-law, I promptly handed over the baby to her but shortly after that, the supposed nurse and Linus disappeared.”

In her confused state and nowhere to turn to for succor in a strange land, Peace found her way to the National Human Rights Commission (NHRC) and later to the National Agency for the Prohibition of Trafficking in Persons (NAPTIP).

The agencies set their tracking device in motion and were able to recover the baby alongside four other teenagers from the run-away. It was furthered discovered that Linus leads a syndicate, which specialized in luring teenage mothers with the promise of marriage to dispossess them of their babies.

He added that some couples who bought babies from the syndicate were also in custody of the agency, but they were shielded from the press as they had agreed to be principal witnesses against members of the syndicate.

Orakwue urged parents to provide a support system for their children when they mistakenly get pregnant so that they would not fall into the hands of criminals.

According to him, the agency with officials of the Ministry of Women Affairs have begun to consider a review of adoption laws in the country to plug the loopholes being exploited by criminals.

Aside, Peace, other victims of Linus were one Miss Rebecca Auta who was found in his house, Miss Oluchi Adache, Miss Ngozi Nwali and Miss Ijeoma Linus. All of them, except for Auta, were unwedded teenage mothers who Linus had ‘married’ and were dispossessed of their babies.

One of the baby buyers, Mr. and Mrs. Godwin Dike and Mr. and Mrs. Thomas Anyanwu, claimed they had bought babies from the syndicate at prices ranging from N400, 000 to N500, 000.

However, Linus refuted all allegations against him while his partner in crime, Onwelikwe, mother of five, admitted selling the babies, but insisted that she sold them on humanitarian grounds to provide money for the girls for their upkeep. (Source: DailyPost)

The Fallacy Of Pilgrimage In Nigeria – Ugochukwu Raymond
Gay Nigerian Asylum Seeker, Olalekan M Ayelokun To Be Deported From UK