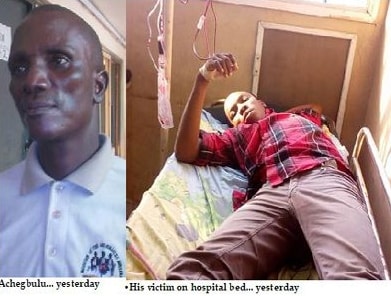 Officials of Lagos State Police Command have uncovered an illegal blood bank being operated by a man identified as Paul Achegbulu in Bariga area of Lagos Mainland.

According to CP Imohimi Edgal, the 45-year-old suspect was arrested at his 1-bedroom apartment at 18 Kusa Bus stop in Bariga where he operates from.

He was said to have collected blood from children there for sale to some clinics.

It was gathered that the police recovered seven pints of blood from his home.

According to residents, the suspect got into trouble on June 10, after a 17-year-old boy, Ayomide Adesanya, he collected two pints of blood from, passed out.

He was said to have earlier drawn two pints of blood from the same victim on June 4. The suspect reportedly gave the victim N2,000 on each occasion.

Edgal, who visited Adesanya in hospital, told reporters that the suspect lured underage children with N2,000. The suspect, the police chief said, had confessed that he sold the blood for N7,000.

He said: “Adesanya became weak after donating four pints of blood. He collapsed and is currently receiving treatment at the Bariga Hospital.

“The mother told us that the daughter’s friend informed them of Adesanya’s condition after she saw him on a bike.”

But the suspect said he did not know Adesanya was underage, adding that the victim told him that he was 20.

“It was when his parents came to confront me that I knew he was 17. He told me he was 20. I am a lab scientist. I was trained five years ago at the Nigerian Institute of Laboratory Science Technology.

“Lab technicians from hospitals used to come and buy blood from me. I used to sell the blood through my assistant, Alfa. He’s the one who knows the hospitals he sold to. I do not know where he is at the moment.”

Condemning the action, a group, Child Protection Network (CPN), said the blood was collected with a cannula in a stuffy room, where the suspect lives with his nursing wife and their baby.

A cannula is a thin tube inserted into the vein of other parts of a patient’s body for the collection of blood or consumption of medicine.

The group’s coordinator, Ebenezer Omejalile, decried the use of the blood by hospitals, noting that they were neither screened for HIV, Hepatitis or other communicable diseases.

“Adesanya is currently on blood transfusion at the hospital. He was moved to Somolu General Hospital by his parents and as of 5pm, he was receiving his second pint of blood.

“We demand the investigation and arrest of all those who have been buying blood from Alfa. The suspect’s family has promised to go all out to pervert justice in this case. The matter was first reported to the Federal Special Anti-Robbery Squad (FSARS) men at Gbagada but they did nothing about it.”