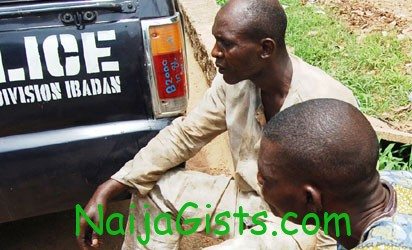 He was paraded with his alleged accomplice, Isiaka Akanbi, on Tuesday, in respect of beheading of a middle- aged woman in Ibadan.

After allegedly killing his mistress, Sakirat Emiola, he was accused of beheading her and cut off her two hands.
He was said to have hanged himself with his shirt which was tied to the iron bar of the cell where he was detained. After his parade, he was taken to the police station at Iyaganku.

The murder suspect was said to have killed himself yesterday morning at Iyaganku, Ibadan.

Confirming the incident, the Commissioner of Police Mr. Mohammed Tambari, said all the policemen on duty at the time would be queried.