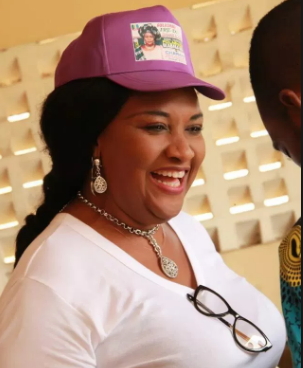 Why I Didn’t Marry White Men While In UK

I had friends who were white. While in the UK, I had foster parents who were white, though my parents were usually sending them money for my upkeep. I remember my foster mom telling me that one can only find love once in a lifetime. When she lost her husband, she never re-married. She influenced me a lot too. However, I don’t think that my biological mom would have liked me marrying a white man. I also remember her telling me that I should never forget the child of whom I am; that my name is precious.

How I Met My Husband

He was my brother’s friend. My brother was a tough guy. He used to beat me as a child (laughs) but he could not do without me. He used to do things for me. When we grew into adulthood, I noticed that anytime that I asked my brother to run an errand for me, especially when I was home from abroad, he used to go with this particular friend of his. That was how I met my husband. We first became friends. Then I travelled out again and he also went to the UK. We met years later. And he told me that my shakara was too much. You know as a young girl, I stayed away from the boys, so I found out from him that many of those boys thought I was snobbish. Well, I didn’t know that was how it looked. I think he was on a mission to show me that he could overcome my shakara, only to find out in the middle of the mission, that he had fallen in love with me. And because we had been young, growing up friends, I used to tell him most things about myself, and he used to tell me things about himself. There was a time that he told me he was looking for a wife and he said he wished he could find someone like me. But at that time it didn’t cross my mind that it could possibly me because I didn’t have him in mind at all. I believed we were just friends.

How It All Happened

One day, four of his friends came around with him; they said they wanted to take me out on a treat. I told them it wasn’t my birthday. But they insisted they just wanted to ‘spoil’ me a little. I agreed and went out with them to a posh place. Of course, after the merriment, I told them I was on my way home. They said no, not so soon, that they had a message for me. Startled, I asked them, message from who? They laughed, they repeated again that someone sent them to me. I knew that the message wouldn’t be an evil one anyway, so I told them to deliver their message so I could be on my way. They told me that the person said he wanted to marry me. Marry me ke? Those were the first words I could say, because that was the last thing on my mind. Angrily, I asked who the person was. They were suddenly afraid and told me not to shout. All of a sudden, it dawned on me that he particularly had been quiet all along, and when the others were sitting around me and doing the talking, he was a bit far off and quiet.

So, I looked at him, he was the closest friend to me among all of them; so I asked him, ‘you too, do you know the person they are talking about?’ He looked at me as if he was seeing me for the first time, and replied, ‘they are talking to you, just face them and answer them.’ His friends then mentioned his name, that he was the one that sent them. I turned to him and said, ‘this one? How can I marry him? I told them, this one, he is not a serious human being (laughs)!’ He then said to his friends, ‘what did I tell you, her shakara is too much.’ I sat down and I was thinking fast. ‘Could this guy be serious for once?’ I turned to him after some moment of silence, and asked him, ‘look if you are truly the one that sent these people, and you are sitting down here, can you open your mouth and talk?’ He looked at me and said, ‘yes, I am the one.’ I told him, well I have answered them that no marriage. There was a quiet moment again and suddenly, his friends turned to him and one of them said, ‘Omo, you see your life?’ He looked up, looked down, then turned to me, ‘what do you want me to do now?’

At that point, I told him that, ‘I have known you almost all my life and I know all the things that we used to gist about. Anyone that knows you the way that I know you and marries you needs a lot of prayers.’ He said, ‘yes, I know, shebi you are a prayer person, you will help me with prayers.’ So I told him that I will test him right away to know if he was serious. I was actually joking; I knew some things that he could never readily do. I told him if you are serious, prostrate for me now, in front of your friends. He didn’t think twice about it, he went flat on the floor! I was afraid. So I said, ‘wahala de!’ That was when I realised how serious the matter was. This guy truly wanted to marry me. Was I ready? I told him, I will think about it. From then, that was how we gradually changed the relationship. He started changing character and showing seriousness that grew by the day.

He got serious and it became good. We lived in the UK where he worked as a journalist with a foreign media. I think I started young with child bearing; now I have adult children. I think it has been the grace of God because we have had our own fair share of problems too. But His grace has been sufficient for us. I have had to work while going to school, juggling between being a mother, wife and student all rolled into one. I couldn’t have done it without my mother. She was always there as a pillar.

We will love to hear your beautiful love stories. Share your marriage stories with us via email at naijagistnews@gmail.com.

Continue Reading
You may also like...
Related Topics:gist, marriage, story

How To Keep Your Marriage Strong By Loving In Words
Creative Ways Nigerians, Ghanaians & Africans Can Make Money Online Through Amazon, Fiverr & YouTube