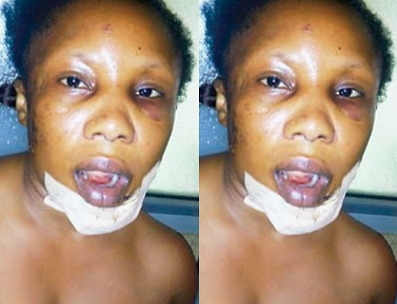 Check out what a married police officer did to his girlfriend’s room mate in Ejigbo area of Lagos on Saturday January 21st around 9pm.

The officer, Idiahgbe Iyobosa who is attached to a bank in Festac town reportedly hit his victim, 30-year-old Oluchukwu Ezemaduka in the jaw with his service boots until blood gushed out.

He was said to have branched at his girlfriend’s place with the intention of passing the night.

On getting there, he requested for his girlfriend, Maryjane Anyagwa’s whereabouts but Ezemaduka didn’t answer him. Enraged by her response, he resorted to attacking the innocent woman until people rescued her.

The victim who is currently admitted to the hospital is expected to undergo two surgical operations in order to fully recover.

Here is what the run-away girlfriend of the angry officer told reporters: