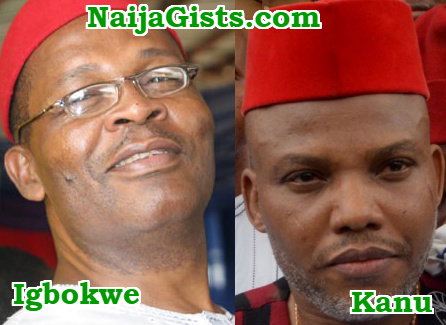 August 13, 2017 – Mazi Nnamdi Kanu Not An Igbo Leader, He Is A Kid, Woe Betides A Nation Whose Leader Is A Child – Igbokwe

Mazi Nnamdi Kanu Became Popular By Abusing Other Nigerians, He Is Not An Igbo Leader, He Is A Kid

Joe Igbokwe, an Igbo politician recently talked about his relationship with IPOB, Nnamdi Kanu and why he is not in support of Biafra.

See excerpts of his interview with Bayo Akinloye below:

Do you believe that Igbo are being marginalised?

If you grant one additional state to the South-East today, the region will at once have one more governor, one state capital, more senators and House of Representatives members, more local government councils, one more House of Assembly, a federal university, a polytechnic, one more minister, ambassadors, thousands of jobs and take-off grants. Nigeria must do this now and it is going to change a lot of things, calm nerves and (resolve) agitations. We must do this and the time is now. Former President Olusegun Obasanjo’s constitutional conference approved one additional state for the South-East in 2006. The region has yet to get it.

Nnamdi Kanu has become a popular figure in the South-East, recognised by prominent personalities. Don’t you think he is the new leader that can truly lead the Igbo?

The late Emeka Odumegwu Ojukwu has done his bit, Ralph Nwazurike has done his bit and he is still fighting. Nnamdi Kanu has also joined but his method of agitation is potentially dangerous and frightening. Nnamdi Kanu became popular by abusing other Nigerians – calling Nigeria a zoo, and preaching hate and ethnic bigotry. Hate speech can lead to exchange of hot words, and the next (thing that can happen) is war. Once there is a full-scale war, thousands or millions will die. After the loss of the 2015 (presidential) election, which Igbo never thought Jonathan would lose, hell was let loose. The colossal and tragic loss led some Igbo leaders to believe in anybody that will throw as many stones as possible at the All Progressives Congress and President Muhammadu Buhari. I can understand this. They did not play better politics as they put all their eggs in one basket. Kanu became what they needed to fight back.

Now you must hear this: Kanu is not an Igbo leader and can never be one. He is a kid. The Holy Book says: ‘Woe betides a nation whose leader is a child.’ We have competent, trusted and tested leaders in Igbo land. We have millions who do not believe in the so-called Biafra and when the chips are down, you will hear them loud and clear. Leading a sophisticated and hard-working tribe like the Igbo is not an all-comers affair. It is for the serious-minded; the cerebral; the educated; the cultured; and experienced. We have yet to know Nnamdi Kanu’s pedigree, temperament, antecedents, and education. You cannot put a crown on a clown and expect a king. If a blind man leads a blind man, both of them will fall into a pit. Kanu – with all due respect – cannot lead the Igbo. This I know, all things considered. What we need now is war of sense and not war of bullets.

But do you support his call for a state of Biafra?

Support for a state of Biafra? No, sir, and I say this with all emphasis in my command and with all the energy at my disposal. I have my reasons. One, South-East is too small for Igbo enterprise. Two, diversity should be a big plus in Nigeria and not a minus. We are better united with justice, equity and fair play. Three, Igbo have invested heavily in the ‘project Nigeria’ so much so that throwing away their monumental investments for the sake of a small Biafra is tantamount to committing political, economic and social suicide. Four, all Nigerians have paid the price of the unity of this country with millions of souls (lost) between 1966 and 1970. Therefore, we must work hard to remain one nation – for one destiny and one God. Five, given the history of Igbo and their republican attitude, I do not think we can manage one another in Biafra. Biafra may turn out to be another South Sudan because of leadership tussle and struggle for power and positions. Six, Biafra is landlocked. Seven, Nigeria provides a big space for Igbo to operate. I can go on and on to give you 10 reasons but time and space will not permit me.

Why do you think prominent national figures like Prof. Ben Nwabueze, Chief Mbazulike Amechi, and Dr. Alex Ekwueme from the South-East have publicly associated with Kanu?

I do not think Ekwueme, Amechi, and Prof. Nwabueze are supporting Nnamdi Kanu for Biafra. They are advocates of the restructuring (of the country) who are using Biafra agitation as a tool of blackmail to achieve their desired objectives of getting a restructured Nigeria. Their tactical support is not an endorsement for Biafra. This I know.

So far, it would appear the Indigenous People of Biafra have gone about their agitation without employing violence and the government has been criticised for trampling on IPOB members’ rights, with claims that some of them were killed by security operatives and others left in jail to languish without being tried. Do you think that’s right?

IPOB in deed and in word has not been making their agitation without violence. Have you ever listened to Radio Biafra? They preach hate, violence and war. I saw a video of Nnamdi Kanu in the United States asking Igbo residing there for money to buy arms to fight other Nigerians. I know what they told him. Hate speech leads to war and war leads to deaths and, therefore, IPOB preaches violence. In the South-East, they extort money from traders after intimidating them. They harass citizens and threaten them with violence. They intimidate them to close their shops. I suspect that they bear arms also. They have talents for mischief. This is potentially dangerous. IPOB is exposing Igbo to another war and this is unacceptable.

Don’t you think Odumegwu Ojukwu would have thrown his weight behind Kanu if he were alive today?

I do not think Ojukwu would have supported violence through hate speech and abuse of other Nigerians. Ojukwu would have known that there are millions of Igbo residing and doing their business outside Igbo land. Ojukwu would not have thrown his weight behind anybody that will endanger Igbo lives and property across Nigeria. Now, have you asked yourself why the Arewa youths issued the notice to quit to Igbo residing in the North? They did so because nobody has monopoly of violence or hate speech. They did so because prominent Igbo leaders kept quiet while Nnamdi was preaching hate and is still preaching hate to date. They did so to demonstrate that there can be balance of terror and hate.

If you feel Kanu isn’t fit to be Igbo leader in the mould of Ojukwu, who can?

The President General of Ohanaeze, Chief John Nnia Nwodo, is there. The five (South-East) governors are also there. There are also other prominent leaders in Igbo land. We have never sat down to pick one Igbo leader in Igbo land. Maybe time has come for us to do so because of Nnamdi Kanu’s nuisance value. When elders are not at home, children may wear snakes as necklaces.

Do you think the Movement for the Actualisation of the Sovereign State of Biafra and IPOB deserve the kind of treatment they’ve been getting from the government?

What treatment have they been getting? Please go back to history. No section of this country can be said to be free from this kind of treatment. Do you know what the Yoruba went through or what they suffered between 1993 and 1998? Do you know what the northerners suffered during the Maitasine and Boko Haram crisis? No serious government will sit down and allow a group to become a threat to national unity. An intelligent and well-informed approach is the way to go. Constructive engagement is the way forward. With common sense – even though common sense is not so common – we can get the world to pay attention to us. Violence, hate speech, and ethnic bigotry bring war and people will die.

With the enforcement of the stay-at-home protest by IPOB, do you still deny the fact that Igbo are firmly behind Kanu?

May we never use the sit-at-home protest Igbo do every year on May 30 to remember the fallen heroes to think that it is an endorsement of Biafra. It is not, please. May 30 means so many things to so many Igbo. Yes, we lost the war but we have not forgotten the consequences.

Have you met Kanu before and do you have any relationship with him?

I have not met Nnamdi Kanu before and I have no relationship with him. I offered to have a debate with him, so that the world will know the content of his inner chambers when he said he would defeat seven professors in a debate on Biafra, but he ran away. I wanted to use that debate to bring to the fore his carriage, his thoughts, and inner disposition. He did not accept the challenge. I also made public my story and asked Nnamdi to do the same. He kept quiet. The young man has nothing to offer. Someone said he is an over-bloated (sic) kid with a protozoan intellect.

If you were to meet Kanu face to face, what would you tell him?

I would tell him that the fundamentals have changed for anybody to talk and think about Biafra at this present stage and age. I would tell Nnamdi Kanu that with equity, justice and fair play, a united Nigeria is a better option (than Biafra). We must also work with other Nigerians to get a Nigeria of our dream. Building a nation is not as easy as milking a cow. Difficult situations require difficult solutions. Biafra is not the solution.

Evans The Kidnapper Used To Jog Around His Estate To Get Info About Potential Victims – Police
God Told Me Nigeria Has 3 Years To Get Things Right, If Not He’ll Move The Fire To South Africa