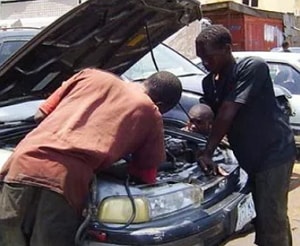 A mechanic identified as Clement was today confirmed dead at the Lagos State University Teaching Hospital (LASUTH), Ikeja, after he fainted while repairing a vehicle.

We learnt the deceased, whose address was unknown, suddenly became unconscious and was rushed to the hospital for treatment.

Clement was later pronounced dead  in the hospital.

Continue Reading
You may also like...
Related Topics:die, hospital, mechanic