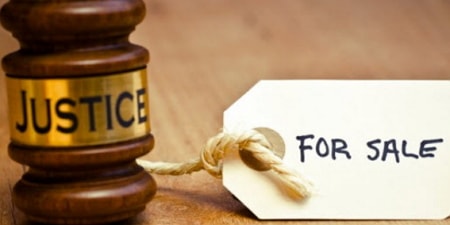 The Independent Corrupt Practices and Other Related Offences Commission (ICPC) has secured a three-year jail term for a Chief Magistrate, Mohammed Balogun, for collecting a N50,000 bribe after 15 years of trial.

The Magistrate had demanded N100,000 from a litigant, Dr. Isidore Nnadi for the purpose of giving him favourable judgment.

But Nnadi alerted the anti-graft agency which later effected the Magistrate’s arrest.

He was arrested during a sting operation after receiving the marked cash.

A statement issued by the Spokesperson for the ICPC, Mrs. Rasheedat A. Okoduwa, however said Justice Ishaq Bello gave the convict an option of N500, 000 fine to stave off prison stay.

The statement said: “Balogun was charged before Justice Ishaq Bello by the Independent Corrupt Practices and Other Related Offences Commission (ICPC) on a two-count charge of demanding and receiving bribe from a litigant in his court, Dr. Isidore Nnadi.

“The convict was arrested after collecting the sum of N50, 000 as gratification from the litigant, following a sting operation by ICPC.

“The Commission, in the charge sheet, said the actions of the convicted magistrate violated Section 8 (a) (ii) of the Corrupt Practices and Other Related Offences Act, 2000 and punishable under the same section.”