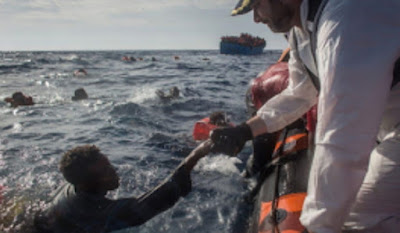 Nov 23, 2017 – Mediterranean Sea: A Journey Of No Return To Unlucky African Migrants Searching For The Golden Fleece

It came as a rude shock to many few weeks ago when news filtered in that 26 Nigerian dead bodies, mostly teenage girls between the ages of 14 and 18 were found in an Italian warship named Cantabria. Subsequent investigations by the Italian authorities revealed that the girls drowned while trying to cross the Mediterranean Sea from Libya to Italy and also that two of the girls were pregnant. They also did not find any sign of sexual molestation or rape on the dead bodies.

However, this is not the first time that this has occurred. As a matter of fact, the success rate is far higher than the failure rate which has only served to incentivize many young people to try their luck. According to statistics from the Italian Foreign Ministry, over 100,000 migrants successfully crossed the Mediterranean Sea from Libya to Italy this year alone. What are the factors propelling our youths to embark on such hazardous journeys often through deserts where they could be attacked by bandits or devoured by wild animals looking for food to eat?

They could drown in the Mediterranean while trying to cross from Libya to Italy often on overcrowded dinghies and without life jackets. Who are the sponsors of these youths as recent research indicates that it costs nothing less than $6,000 to ferry these youths to Europe through these dangerous routes? What steps can be taken by the various authorities to stop this illegal migration?

The Nigerian government through the Ministry of Information and the National Orientation Agency in collaboration with the media should embark on a massive sensitization campaign to disabuse the minds of young people about the illusion of prosperity overseas. 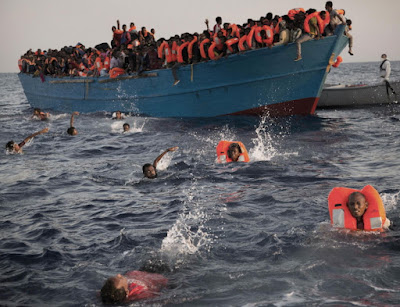 The current economic hardship bedevilling our nation has made many to falsely assume that you can literally pick up gold from the streets of Europe and America. The campaign should also promote the virtues of self-reliance, hard work and the dignity of labour among the youths. The youths should be told in clear, unequivocal, unambiguous and unmistakable terms that the days of depending on the government for white collar jobs are over. That it is only through the engaging of your divine and God-given talents that you can be successful in life.

One wonders how they are able to raise the princely sum needed to embark on the trip when they complain of economic hardship principally induced by lack of jobs. The same energy that they use in generating such an amount of money can also be used to generate funds which can be invested in productive ventures which will not only benefit them but also the larger society.

The African Union should take proactive steps in not only blocking the smugglers routes but also criminalizing illegal migration with punitive measures for both the smuggler and the illegal migrant. The European Union most especially Italy should stop granting refugee status to those who cross the Mediterranean successfully. They should be immediately deported to their home countries.

A similar tragedy occurred some years ago when over 2000 migrants (many of them Nigerians) perished in the Mediterranean sea close to the Italian Island of Lampedusa while on a perilous voyage to seek the proverbial golden fleece. This is one tragedy too many and all hands must be on deck to forstall a reoccurrence of this avoidable waste of human capital and future leaders.

About the author: Peter Akus writes from Ifo, Ogun State.