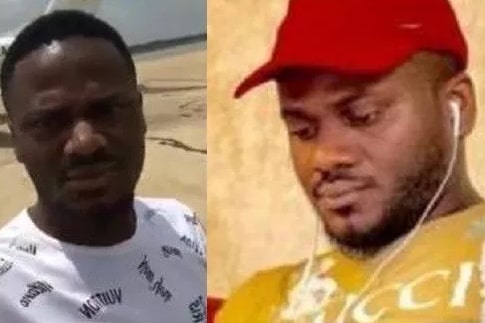 Mike Cash Not Dead. He Is In Coma – Dapo Asiwaju, Brother Of Alleged Rapist Furniture Dealer Who Committed Suicide Over Blackmail

Michael Asiwaju, the founder of Asiwaju Royal Furniture in Ojo Lagos is not dead.

Contrary to the viral report about his suicide, his US-based brother, Dapo Asiwaju, said the furniture dealer who drank a bottle of sniper on the 13th of January 2019 is still in coma in the hospital. 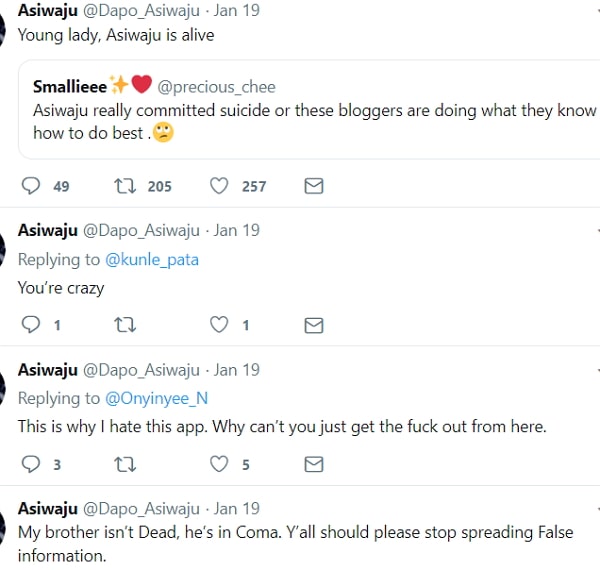 “I (am) here, I’ll need to say my own side of the story. I know my former business partner sponsored this blackmail to destroy me cos (because) she’s contesting on the platform of All Progressives Congress.

“You all claimed I raped you? We met on the social media, I took you to a club, I spent N500,000 popping Champaign cos (because) of you and we had sex when am (sic) high and you call it rape?

“This two people (sic) and Blessing should be held responsible if anything happens to me. You came to visit me cos (because) you know I have money. We went to a club; I bought drinks worth half a million naira; we had sex inside my car you claimed I raped you just to tarnish my image.

“We discussed sex before you came; all this happened in 2017. None of you reported me to the police. In 2019 cos (because I) am supporting PDP and my bestie is contesting under APC, she sponsored this thread to destroy me.”

“You sent me this (a picture exposing breast and private parts) and we clubbed together; got high and you called me a rapist just to tarnish my image.

“Someone DM this (another nude picture) to me on Twitter; why do you people want us to expose ourselves? Plenty big gals (girls) on this platform send me nudes that they want me. When I sleep with them and stop talking to them, they blackmail me.

“I don’t care anymore. My mother is dead. I’ll expose all of you. Why will you destroy me when I told you my mother just had (a) heart surgery? Now she’s gone; everyone is crying cos of your stupidity. Are you happy now?

“You claimed I raped you. Bring police report. You feel blackmail will destroy me. Today might be the last time I tweet or breathe. Before you blackmail someone, think about their mental health. Are you happy now for destroying Asiwaju? Are you really happy Blessing?”.

“This story made me lose my mum. Even when I called, I pleaded with these people to take down the post; that my mother just had (a) heart surgery. Imagine if I wanna pay back but I won’t cos I won’t be available.

“My advice for Nigeria girls; when you meet a guy, you like him cos he is rich; you talk sex before meeting him; don’t call it rape when he sleeps with you.

“What will you gain from this blackmail? Imagine if I decided to come after you and your family? But I won’t. Now that you have blackmailed and destroyed me, wetin u gain (What did you gain)? My mother is gone cos of this; I can be gone too cos right now I’m not myself anymore.

“If you all want me to expose you, I still have your fucking nudes on my phone. Did I force you to send me nudes? Do you really wanna (want to) get exposed?”

“My mother is gone. What am I doing here? Let’s get dirty on social media; stop calling me again to stop posting. Asiwaju raped you; tell Nigerians what led us to sex. Don’t sugarcoat things to spoil my image.

“I met her on Twitter. She sucked my ass; she called me the richest guy she had ever met in her life and she’s among the people blackmailing me on Twitter. Imagine if I post her real face online. Goodbye I’ll die soon. (I) am gone,”

Before dropping the above suicide letter, Mike Cash shared the story of a lady who accused him of raping her at a hotel in Festac Lagos.

Here is the damaging story.

“I don’t want anyone linking me to this. He raped me. His full name is Michael Asiwaju. He owns a furniture company. He’s also known as Mike Cash. He is mostly in Festac. He tried to lure me with money and gifts. He was asking me out and I refused. I was just fine being friends with him because he was a controlling person.

“He said I’m his girlfriend and I just laughed about it cos (because) I never agreed to be his girlfriend. He always wanted me to come see him but I always refused. Then, he accused me of sleeping around with men. I ignored him and then he apologised. So he called me and said I should come hang out with him and his friends at the beach.

“So I thought it was okay to go see him since it was an open place and his friends were gonna (going) be there. So when it was time to leave the beach, he was supposed to drop me off at Lekki Phase I; then I’d get Uber to take me to my house. He also had to drop one of his friends at his hotel. So we were all in the car and then his friend dropped midway.

“Mike said we had to go to his friend’s hotel to wait for him. I didn’t even understand what was going on but I didn’t mind cos (because) we were not alone. His cousin was there too.”

“Mike kept telling me to go chill in the room instead of waiting at the lobby. He kept assuring me that I’d be okay. So I went to the room; (the) biggest mistake of my life. I really trusted that nigga.

“I was alone for a while, then he came in and locked the door. I started to panic. He started touching me and all that. I told him I wasn’t in the mood. So he said I was his girlfriend and he would have sex with me whether I was in the mood or not. I started to fight him and he became aggressive.”