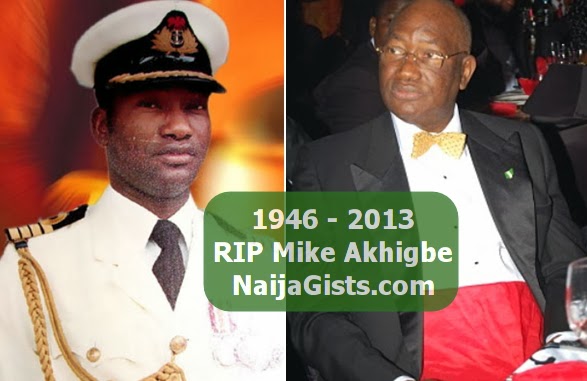 Hours after the rumour of his death circulated the web, the former Vice President of Nigeria has passed on. Retired Admiral Mike Akhigbe is dead.

As his family members were busy sending out press releases yesterday to debunk his death rumour, we learnt that the former Chief of staff passed away at exactly 1:07pm on Monday in the United States of America.

Before breathing his last breath, we learnt he was surrounded by his wife and children. The family had an intimate discussion with him after which he passed on.

According to a top secret source, Mike Akhigbe’s death was caused by throat cancer.

He was first diagnosed in 2010 while campaigning for President Jonathan. He took an emergency leave after the grim diagnosis. He then travelled to Germany where he underwent aggressive cancer treatment for complete 2 years.

He was later transferred to the United Kingdom last year where he stayed until this year.

His last treatment stop was at the Memorial Sloane Kettering Cancer Hospital in Manhattan, New York where he lost the battle to the disease yesterday.

Sloane Kettering  is one of the best cancer treatment centers in the world.

Mike Akhigbe’s death has been confirmed by the Nigerian consulate in New York.

Plans to convey his body back to Nigeria for a befitting burial is currently ongoing.

Late Mike Akhigbe retired from the Military in 1999 when Obasanjo became Nigeria’s President.

May his soul rest in perfect peace and may God grant his family members the fortitude to bear his loss.