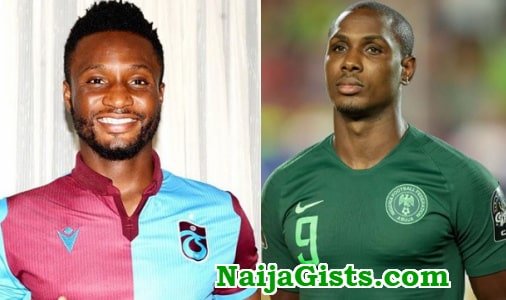 In an emotion post he put up on Instagram this morning, former Chelsea star Mike Obi announces his retirement. According to him, he decided to step down for the youths to take over.

Here is how he announced his retirement on Instagram today:

“Egypt is a country where I’ve started and have finished my National career. In 2006 I played my first official championship for my Country. 2019 African Cup of Nations marks my last championship for National Team with Super Eagles.

My national career started in 2003 under 17 World Cup and I’m grateful for the national team for placing me on the world arena and giving me an opportunity to show my skill and have an incredible National and International career.

At the age of 32 it’s time for me to retire from the National team and let the youth take over, who’ve done an amazing job securing a bronze medal at AFCON 2019.
Thank you to all my Nigerian supporters and to my Country for all the trust, support and love you’ve shown me over the past 15 years.

LEGEND I feel like crying, I have been a true fan from my childhood and always wished to play with you in the future and now the LEGEND who I have much respect for has retired.
I wish you all the best LEGENDARY Player till we meet if possible.”

In another development, Nigerian forward, Odion Ighalo his retirement from the super eagles. He made known following the Super Eagle’s third placed victory over Tunisia on night at Egypt 2019.

Odion, who is the highest goal scorer in the 2019 Africa Cup of Nations, informed coach Gernot Rohr of his decision before leaving to join his club in China immediately after the game.

“He had discussed his decision with the coach before the third-place match, saying that the constant abuse was taking a toll on his young family but he was advised to keep it under wraps for the moment. After the game, he gave his jersey as a souvenir to the coach, said his goodbyes and left,” a source stated.

Prior to the game, the 30-year-old posted a message on his WhatsApp status update that simply said “Final Game”.

“He has been very strong for us,” Rohr said, “And it is sad that he wants not to continue.

“But the door always is open for him any time.”

Ighalo, something of a late bloomer, made his senior debut for Nigeria in 2015 as the Super Eagles lost 1-0 to Uganda in a friendly.

He made 35 appearances for Nigeria, scoring 16 goals.

He was also top scorer through the 2019 Africa Cup of Nations qualifiers with four goals and he could also finish the tournament as top scorer having scored five in Egypt.

Nigerian Greeting Customs: How To Say Hello In Yoruba, Hausa & Igbo Language
NaijaGists Is Upgrading – Exciting News For All