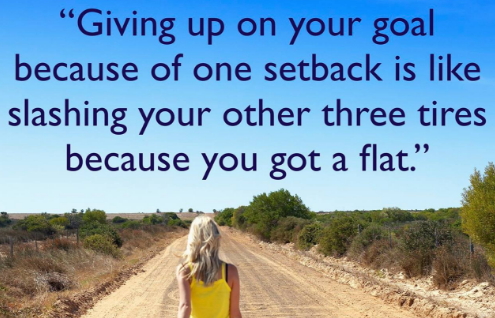 October 2nd, 2017 – Don’t Give Up On Your Goal Because You Might Be Closer To Achieving Your Goal Than You Think

We’ve all reached a point in his life when he wanted something very badly, but he was discouraged and ready to quit. We’ve all had things we strongly desired, but we’ve all failed in reaching some of those goals. When you’re faced with the choice between continuing to fight a “hopeless” battle or allowing yourself the relief of giving up, how do you choose?.

The answer might be different for every person, so I can only tell you mine. I’ve learned over the years that I’ve been too quick to give up and take the easy way out, because I was afraid or I didn’t want to pay the price that might be required to continue fighting or I simply preferred the certainty of quitting to the uncertainty of continuing the fight. When I look back on big things I’ve wanted, I’m not satisfied with any of my decisions to quit.

When I was 28 years old, I started a small community newspaper in an affluent suburb of Birmingham. I thought I was prepared for the battle of a startup when I launched the paper, and I did work hard. But I went through one disaster after another. The people I hired to sell ads couldn’t sell enough, but I made very few sales calls myself, because I was more concerned with producing the product. The source of our working capital disappeared about six months into the project and I couldn’t figure out how to get additional revenue or new investment.

After publishing for nearly a year — and just starting to build a reader base that was rabid about loving the newspaper — I was exhausted and depressed from all the problems. I didn’t know what to do, so I quit. Looking back, I see other things I could have done, but I was tired, discouraged and ready to walk away. I wasn’t defeated. I quit. There’s a difference.

In his influential early 20th century success guide, “Think and Grow Rich,” Napoleon Hill said something that I have slightly paraphrased on a whiteboard in my office, but sometimes I fear that it’s become mere background and I don’t internalize it often enough. When I’m discouraged, though, I read it again and remind myself to keep fighting:

“Wishing will not bring a successful result. But desiring a result with a state of mind that becomes an obsession, then planning definite ways and means to achieve it, and backing those plans with persistence which does not recognize failure, will produce results.” [Emphasis mine]

Those words have stopped me a number of times when I’ve wanted to quit. This might not be true for you, but for me, I get stronger each time I don’t quit. Each time I continue fighting, I get a little more assurance that I can hold out and achieve the things I want to achieve. (You can read Hill’s 1938 book online here.)

From reading Hill’s book a number of times, I’ve learned a lot about the power of persistence in the face of adversity, but one story from the book especially stays with me. The illustration with this article shows diamonds waiting to be found — just a bit farther than someone is willing to dig — but in Hill’s story, it was gold, not diamonds. It’s the story of two men who stopped just three feet from finding the gold they were digging for:

One of the most common causes of failure is the habit of quitting when one is overtaken by temporary defeat. Every person is guilty of this mistake at one time or another.

An uncle of R.U. Darby was caught by the “gold fever” in the gold-rush days, and went west to “dig and grow rich.” He had never heard that more gold has been mined from the brains of men than has ever been taken from the earth. He staked a claim and went to work with pick and shovel.

After weeks of labor, he was rewarded by the discovery of the shining ore. He needed machinery to bring the ore to the surface. Quietly, he covered up the mine, retraced his footsteps to his home in Williamsburg, Maryland, told his relatives and a few neighbors of the “strike.” They got together money for the needed machinery, had it shipped. The uncle and Darby went back to work the mine.

The first car of ore was mined, and shipped to a smelter. The returns proved they had one of the richest mines in Colorado! A few more cars of that ore would clear the debts. Then would come the big killing in profits.

Down went the drills! Up went the hopes of Darby and Uncle! Then something happened! The vein of gold ore disappeared! They had come to the end of the rainbow, and the pot of gold was no longer there! They drilled on, desperately trying to pick up the vein again — all to no avail.

Finally, they decided to quit. They sold the machinery to a junk man for a few hundred dollars, and took the train back home. The junk man called in a mining engineer to look at the mine and do a little calculating. The engineer advised that the project had failed because the owners were not familiar with “fault lines.” His calculations showed that the vein would be found just three feet from where the Darbys had stopped drilling. That is exactly where it was found!

The junk man took millions of dollars in ore from the mine, because he knew enough to seek expert counsel before giving up.

I’d never read Napoleon Hill’s book when I quit my newspaper. It might not have made any difference if I’d read it already. Sometimes we’re just too weak and tired and frustrated to keep fighting. But I like to think about how things might have been different if I’d had the courage and strength to hold out and keep fighting. I like to think I could have built something worth the time and effort that went into it. We’ll never know, though, since I quit instead.

“Nothing in this world can take the place of persistence. Talent will not; nothing is more common than unsuccessful people with talent. Genius will not; unrewarded genius is almost a proverb. Education will not; the world is full of educated failures. Persistence and determination alone are omnipotent.”

I don’t know what your dreams are. I don’t know what obstacles you face in achieving what you want. I know what my own dreams and obstacles are. The dreams are big, but the obstacles seem even bigger. I can give you every reason in the book to quit. (It’s almost always the “rational” thing to do.) But I’ll tell you what my experience and my heart both tell me.

Don’t give up just because you’re tired and yearning for something easier to do. Don’t betray yourself. Feel your desire. Plan and work toward your goal. Show persistence. Don’t recognize failure. Ignore failure. Keep fighting. Persist until you win.

That might not be the right answer for everybody, but I’m constantly reminded that it’s the only answer that’s right for me. Anything less is a betrayal of something very important.

Be strong, keep moving forward…Dont you ever give up because you are destined to succeed!!!

Continue Reading
You may also like...
Related Topics:fear, force, give, goal, up