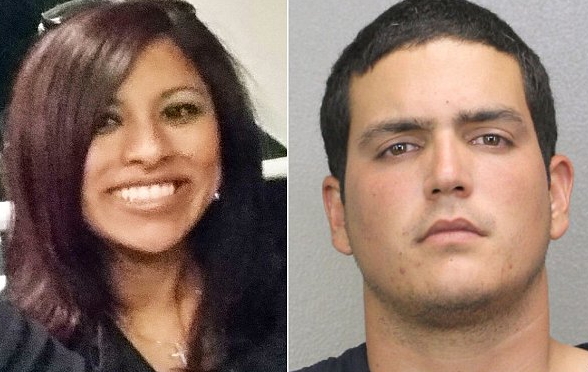 A monster who murdered his girlfriend and ripped out her intestines after she screamed her estranged husband’s name during sex has pleaded guilty to escape the death penalty.

Fidel Lopez, 26, pleaded guilty to murder and sexual battery charges in exchange for a life sentence on Thursday in Florida’s Broward County Court.

He brutally murdered and molested 31-year-old Maria Nemeth at his Florida apartment in 2015 after flying into a rage when she called out her ex-partner’s name during a drunken sexual encounter.

Lopez offered to plead guilty to the charges last month in the hope of securing a 50-year jail sentence, but prosecutors rejected the offer, NBC Miami reports.

They settled on the life sentence on Thursday. He will not be officially sentenced until August 3.

Lopez had called police to his apartment on the night of September 20, 2015 claiming that his girlfriend was having trouble breathing.

He initially told investigators that the couple had been having rough sex when Nemeth went into the bathroom, vomited and collapsed.

Officers responding to the apartment said they found Lopez crying in the bathroom next to Nemeth’s body, which had been disemboweled.

They said they noticed a large amount of blood on the floor inside a closet, more blood spattered in the bathroom and damage to the walls and doors.

A police report from the time noted there was also ‘several chunks of bloody tissue’ on the floor inside the closet.

Detectives initially thought Nemeth may have tried to perform an abortion on herself before they quickly pieced together the grisly crime.

Prosecutor Shari Tate told the court during his hearings that in addition to pulling out Nemeth’s intestines, Lopez also molested the victim by putting a hair straightener and beer bottles in her vagina.

During Lopez’s interrogation, he initially told police they were having rough sex in the closet and she had urged him to use the beer bottles as sex toys.

But he later admitted that he became a ‘monster’ when Nemeth twice said her ex-husband’s name during sex.
‘She changed my name,’ he told detectives.

‘She called me the name of the other f**king guy – and she said it twice and she was wrong and she was confusing me with him.’

An extremely graphic complaint affidavit from the time stated that Lopez left the inebriated woman in the closet as he started smashing things around the apartment – including a sliding glass door and punching holes in the walls.

After his outburst, Lopez returned to the closet where his girlfriend was lying unconscious and proceeded to insert objects into her vagina.

He also admitted to pulling ‘internal tissue’ from Nemeth’s body while she was passed out, according to the affidavit.
Afterward, Lopez carried her naked body into the bathroom and attempted to revive her by splashing water in her face, but the woman did not wake up.

He then washed the blood off his hands and went out onto the porch outside their apartment to smoke a cigarette.

When Lopez went back inside to try to clean up the crime scene and hide Nemeth’s intestines, he realized she was no longer breathing and called 911.