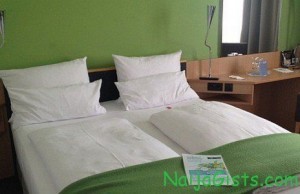 October 12, 2017 – Morak Hotel Owner, George Morakinyo Arrested In Osogbo For Abduction Of Lady With The Intent Of Raping Her

Mr George Morakinyo, a 52-year-old man, who is the owner of Morak Hotel in Osogbo was on Wednesday ordered to be remanded at Ilesa prison by an Osun State Magistrates’ Court sitting in Osogbo, over an alleged abduction and intention to rape.

The Prosecutor, Rasaki Lamidi informed the court that Morakinyo sometimes in September, 2017 at Morak Hotel,Osogbo coerced one Rotimi Elizabeth to his custody with the intent to have her canal knowledge.

He said the accused, on the said date and time abducted the victim, adding that the offence committed by the accused contravened sections 22A(1)(2),222,225,2226 of the Criminal Code Cap 34 Volume.II Laws of Osun State of Nigeria 2003.

The accused, however, pleaded not guilty to the charges preferred against him.

Counsel to the accused ,Barrister Bola Abimbola applied for the bail of his client in the most liberal terms ,adding that the offences are bailable.

Meanwhile, the prosecutor objected the bail application, imploring the court to reject the application on the ground that the victim is currently receiving medical treatment.

In her ruling, Magistrate Adenike Olowolagba, ordered that the accused should be remanded at Ilesa prison custody, adjourning the case till November 22, for hearing.

She thereafter ordered the defense counsel to file a formal bail application ahead of next trial.

Continue Reading
You may also like...
Related Topics:hotel, morak, owner

I Joined Robbery Gang To Raise Money To Pay My Wife’s Dowry, I Have Never Stolen Before – Robber
Davido Risks Life Imprisonment If Convicted Of Manslaughter Over Tagbo’s Death – Lawyer