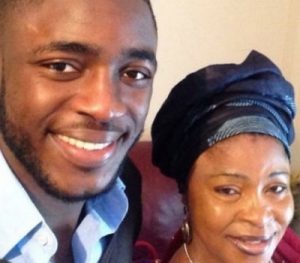 Ronke Badru, the wife of Hon Dolapo Badru who lost his son, 26-year-old Abraham Badru in a gang shooting in London few weeks ago said her son was killed in revenge.

Mr Badru said Abraham was shot dead near their home on Ferncliff Road, Hackney and his mother believes the young man’s death was to revenge his stopping the gang rape of a girl and testifying against the rapists when he was just 14. According to Daily Mail, the devastated mother said Abraham, her only child, gave evidence leading to the sentencing of nine boys who gang raped a 14-yearold schoolgirl 11 years ago but was scared for years after relatives of the rapists threatened the Badru family through different means.

The fear of what could happen to him led to Abraham run away to Bristol, 159 miles away for seven years where he studied a BTEC in Sports Science before attending the University of Gloucestershire for a Masters in Sports Coaching. “He went to Bristol in 2007 after he rescued a girl from a rape. He received threatening phone calls, he was really scared for his life.

They were throwing eggs at our door and everything, the family of the group. “Abraham was just 14 and the police said he was a witness and they said if you do not allow him you will be charged with perverting the course of justice,” the distraught mother whose husband represents Lagos State in the House of Representatives, said. Speaking further, she said: “The family of those boys were coming to my door and saying he should not go to court. He moved to Bristol to continue his education, he was only 16.

When he finished his masters he moved back to London and his car was vandalised outside on the street. “They removed all the tyres and they smashed out the mirrors and the windscreen. He asked the police to be moved away, he was fearful for his life and was scared, he was worried.