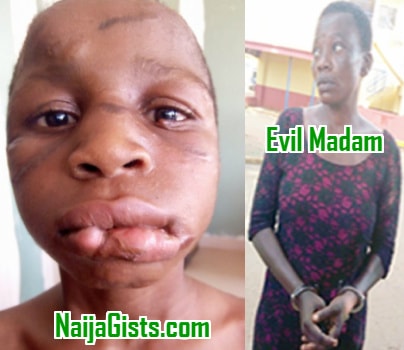 Mrs. Nkechi Bartholomew, the wicked Madam who tortured and disfigured her 12-year-old maid, Faith Nwanja, has been arrested. Mrs. Bartholomew, a trader who sells weave-on and attachments in Onitsha, Anambra State, inserted a big stick which she uses to turn semovita and ‘fofo’ into the girl’s private part. She also forced the girl to eat her faeces and drink her urine. Faith lost one of her hands during the torture.

Faith was accused of stealing her mistress’s money ranging from N100 to N200. She was almost tortured to death but for the woman’s sister who rescued the girl. Bartholomew adopted Faith from Okofia community, Ezza South Local Government Area of Ebonyi State when she was eight years old and took her to Onitsha.

But Bartholomew allegedly disfigured the girl. Nwanja was brought back to the village in mutilated condition by Bartholomew’s sister who was arrested, prosecuted and remanded in prison. Police then went after the main suspect, Bartholomew but she escaped. Since February, the woman had been at large until Wednesday when she was arrested by the policemen from the state command who have been trailing her.

The woman was arrested in Onitsha and brought to Ebonyi State Police Command, Abakaliki. Bartholomew’s husband is a food vendor in Onitsha and is at large. The woman alleged that Faith often stole her money. She admitted that she usually beat up the girl. She has been married for eight years but has no child.

“I usually beat Faith because she steals; she always stole my money. I did not hit her with iron, I used big stick to beat her. I told her to stop stealing my money ranging from N100 to N200. But when I confronted her for stealing my money, she will always denied it and that annoyed me a lot. This is why I always beat her up.

“The parents of the girl voluntarily brought her to me. I did not forcefully adopt her as they claim. When she started stealing my money, I called her mother on the telephone and reported the girl to her. It is devil that made me to treat her the way she is today. I am pleading for forgiveness.”

But Faith alleged that her madam always tortured her with sticks, hot iron and other dangerous things. She also alleged that Bartholomew, who hails from the same area with her, always inserted a stick into her private part.

Faith equally accused Bartholomew of chaining her and that she only ate once in a day which, according to her, was usually in the evening. She said:

“My madam, Bartholomew, disfigured me like this. I was a complete human being when she took me to Onitsha.

She inserted her fingers in my eyes and inflicted these injuries on me. “She usually put stones inside my mouth. She said I don’t normally brush my teeth and since I could not do it, I must always suffer for it.“The husband had never beaten me; he always got annoyed seeing me being tortured by his wife.

At times, he would summon courage and quarrel with his wife because the wife is bigger than the man. “My madam used to lock me inside a dark room after beating me up. I was taken home by my madam’s sister who told her to take me home but she refused. My madam used to tell me that nothing would happen if I die, that she would spend her money and regain freedom if she is arrested if anything happened to me. “I was attending school in the village before she took me to Onitsha. But since four years that I went to Onitsha, I have not gone to school.

“Whenever I am pressed and decided to go and defecate she would meet me there and force me to eat up the faeces. After eating the faeces, she would force me to drink the urine,” Faith stated. Faith’s mother, identified simply as Ngozi, in an exclusive interview with our correspondent, said her daughter was subjected to all manner of torture and degradation. She said: “My family has been good to Nkechi’s mother which was why when she came pleading with me to give her my daughter in 2014 since she was yet to have a child, I obliged on the condition that Faith must be enrolled in a school since she was in primary two, going to three when she left the village,” she said. Ngozi further explained that after Nkechi took her daughter Faith to Onitsha, she stopped picking her calls and even changed her SIM card, after warning her not to call her line again.

She explained that she became worried in 2015 when Nkechi didn’t bring back her daughter as she promised. In 2016, the story was the same and each time she went to Nkechi’s mother, she would say that Faith would be brought back home. In August 2017, Ngozi said that she travelled to Onitsha after so much failed promises to return Faith in search of daughter and she had to stay three days looking for her mistress Nkechi but couldn’t find her because she didn’t know the exact address of her residence. But before her journey to Enugu, Ngozi said she saw Faith in a dream crying, saying she was being maltreated which made her to embark on the journey in search of her. According to her, after the futile trip, she pleaded with Nkechi’s mother to allow her go with one of her sons to Onitsha since he knows where his sister is living. She refused, so she went to Onitsha for the second time alone all to no avail.

Ngozi said in December 2017, she went to Nkechi’s family house and insisted that they must bring back her child. “I told them to get ready to kill me and tell my people why they killed me, but they must give me my child because I didn’t sell her to Nkechi. Even Nkechi’s younger brothers beat me up because I wanted my daughter back. We fought so much that villagers had to gather and told Nkechi’s brother to tell their sister to bring back Faith,” she stated.

The woman disclosed that after the fight in December 2017, on February 2018, they brought back her daughter, but it was Nkechi’s younger sister that brought back Faith instead of Nkechi herself. On getting the news that Faith had been brought, she quickly rushed to meet Nkechi’s mother and asked for her daughter. But the woman told her that Faith went out to play. “I said that was not true, Faith left me when she was eight years old and now she is 12 years old, and instead of coming straight to see her mother she went to play, that is not possible. “I entered into their apartment, used my leg to break the door leading to Nkechi’s younger brother’s room, but Faith wasn’t there.

I went straight to her mother’s room, broke the door only to see my daughter kept beside the bed. “Out of fear I ran away, she started calling me to come back that she is Faith. I said that wasn’t possible because you won’t believe she is a human being; her nose was broken, part of her ear chopped off, her face filled with wounds both fresh and old, her mouth swollen, her hand broken, patches all over her head. “I said no, this couldn’t be Faith, I called her the second time she answered, she called me mummy, I shut her up, asking who is your mother? I asked her my name she said Ngozi, she called my husband’s name, her grandmother’s name, she mentioned it. I collapsed’; I hugged her and wept bitterly and took her home.

“I reported the matter to the police and while Nkechi’s sister who brought Faith back was still preparing to leave for Onitsha the next morning, policemen came and arrested her,” she stated. Ngozi said that Faith took time to narrate her ordeal in the hands of her mistress, Nkechi.She said that one day she went to the toilet but her madam’s husband was already there and when she couldn’t go back anymore, the thing dropped on her pants and on coming out of the toilet, the man called the attention of her wife to the act and Nkechi allegedly told Faith to pass the excrement on the floor and forced her to eat it.

“When my daughter was done eating it, Nkechi ordered her to lick her fingers which she did. At another time she urinated on herself and the woman ordered her to drink her urine. “She told my daughter that eating her excrement wasn’t wrong after all she was the one that defecated. “Faith said that sometimes she beats her up and put her inside a drum and after some days she would come and ask why she was still alive. “She used razor to cut my daughter’s flesh in the name of cutting her hair and she would be bleeding. “She told me that they didn’t allow me to see her the day she came back because of the fresh wound on her mouth, that they wanted it to heal a little bit before handing her over,” Ngozi narrated.

Faith’s grandmother, Mrs. Nwite Nwanja, decried the inhuman treatment meted on Faith who was named after her. She said that she gave birth to 20 children and all of them died except for Faith’s mother who survived.”I suffered to bear children and out of 20 of them only John, Faith’s father survived.

My second grandchild Faith was named after me and I love her so much but look at what a woman did to her. She has been deformed by people I helped so much. Of all the good things I did for them, look at how they paid me back. I want justice for my granddaughter, and my family. Nkechi has shown her wickedness and Satan would be the one to punish her for that,” she said. Head of Department, Child Development of the state Ministry of Women Affairs and Social Development, Godwin Igwe, said the health condition of Faith had worsened after her torture.

“The child was battered, dehumanised and subjected to degrading treatment by Mrs. Nkechi Barth at Onitsha in February. That Child has been undergoing medical examination by a team of gynaecologists, team of orthopaedic doctors because of serious harm inflicted on her reproductive system, her hand, her ear, teeth and all over her body.

“The woman inflicted injuries on all part of her body. Last week, her medical examination was concluded and the hospital management said the report would be released to the police as soon as it is demanded,” he said. The state Police Public Relations Officer, ASP Loveth Odah, said Faith was subjected to inhuman treatment for four good years.

“Ehe Ebonyi State Police Command in its sustained drive to purge the society of ills, vis-à-vis, evil child minders/ traffickers, the command dragnet, caught one Nkechinyere Bartholomew Mbah, 32 years old, a native of Ohage Okoffia in Ezza South Local Government Area of the state, and that all effort to locate the suspect proved abortive. Miss Faith Nwanja was however traced and found disfigured with lacerations all over her body. “She was subjected to inhuman treatment for four years.

The Commissioner of Police, therefore, wishes to use this medium to warn, parents to care for their underage children who are vulnerable to inhuman treatment by their supposed guardians, using Faith as a case study. The future of little Faith is totally at the mercy of God,” she said.