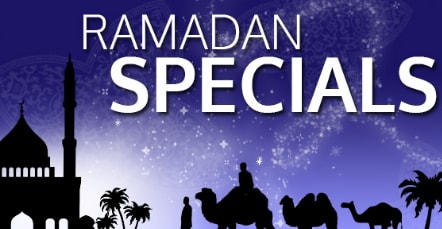 “Who are we to make such a decision? To allow another living being -any living being- to die, when ours is the power to prevent it?” –Reed Richards

Last week we dug a little into the private life of the Islamic prophet, and hypothesized alternative reasons why he married more women than his own ‘revelation’ allowed.

Today, in this special Ramadan series, we will dig into another major aspect of his life, namely, his role as a warrior.
No matter what Islamists today say, I think it’s time for everyone to come to grips with the fact that, the Islamic prophet was indeed Islam’s first military general and leader of a successful insurgency.

Had he failed as a fighter, Islam may have been relegated to the geographic backwater of Arabia, and the conquest of most of Byzantine Christian Empire by later Islamic forces would never have occurred.

Although the idea of a warrior prophet may be offensive to many Muslims, it is true.
Islamists today tell us that all the wars were fought in self-defense. But studies upon study, expert upon experts have proved to us that nothing could be further from the truth.

While some say “Our Prophet forbade offensive attacks of all forms… He only permitted fighting in self-defense” others, like J. Ahmed Ghamidi explained that “…directives of the Qur’an pertaining to war… were specific only to Muhammad against Divinely specified peoples of his times…Pagans, Jews, and Christians…as a form of Divine punishment -for they had persistently denied the truth …after it had been made conclusively evident to them by Allah through Muhammad…”

I find this explanation unacceptable for the simple reason that experts told us that his ‘prophet hood’ was not “…made conclusively evident…”, they say there are no records, be it historical, religious or archeological, of his message prior to his appearance and that the rejection was in line, since his message was a clear distortion of the Jewish and Christian messages respectively.

Proponents of defensive wars argument should explain the account of the numerous battles, among which were the Battle of Badr, in which the Islamic prophet sent his men out to raid caravans, then deliberately provoked a battle with the Meccan army sent out to defend them.
Bukhari 46:717 tell us that “The Prophet had suddenly attacked Bani Mustaliq without warning while they were heedless and their cattle were being watered. Their fighting men were killed and their women and children were taken as captives”

Countless reliable accounts in the Hadith and Sira mentioned incidents where people were grazing cattle or farming and were attacked. In many cases, the records say the Muslims raped women after slaughtering the men (Sahih Muslim 3371). The question now is how does raping a female captive denote self-defense?

What, for example, was the compelling reason for sending his army into hitherto Christian lands, for example Syria? In fact, history tells us that at Muta, Syria, his force met with disaster at the hands of the Byzantines at that time. (Ibn Ishaq/Hisham 791, Ibn Kathir v.3 p.326-337)

Now, had this been a matter of self-defense, the enemy would have followed the routed army back to Arabia, but this was not the case.
We also read about the Tabuk raid, which was a second incursion into a Christian territory, and how locals were forced to pay him tribute after ambushing and killing their civilians to assert his authority (Ibn Ishaq/Hisham 903).

Obviously self-defense was not a factor in any of these cases.

The first part of Sura 9 was revealed shortly after the Muslims established military dominance in Mecca and verse 5 read: “But when the forbidden months are past, then fight and slay the Pagans wherever ye find them, and seize them, beleaguer them, and lie in wait for them in every stratagem (of war)…”

The words, “when the forbidden months are past,” preclude the possibility that this was a matter of self-defense, and in any case, how can “…laying ambush…” translate to self-defense?

Another well documented example is the attack on the peaceful community of Khaybar. Unfortunately for today’s Islamists who deny that this was an aggression, not only is there no supporting evidence that the Muslims were under attack by the Khaybar Jews, but there are at least historical references that flatly contradict any notion of self-defense. Ibn Ishaq/Hisham described the incident thus:

“We met the workers of Khaybar coming out in the morning with their spades and baskets. When they saw the apostle and the army they cried, “Muhammad with his force,” and turned tail and fled… The apostle seized the property piece by piece… (Ibn Ishaq/Hisham 757).

Note that these people were not attacking; in fact, they did not even know they were supposed to be at war
We also read that “when the apostle raided a people he waited until the morning. If he heard a call to prayer he held back; if he did not… he attacked… we came to Khaybar by night … and when morning came he did not hear the call to prayer, so he rode and we rode with him. (Ibn Ishaq/Hisham 757)

In fact, according to the hadith, we know the Islamic prophet was fond of yelling “Allahu Akbar” before and during attacks. (Sahih Bukhari 52:195 ). Who today doesn’t know that this tradition has passed down to modern-day Islamic terrorists?
Perhaps the best proof against the self-defense argument is what we read in one of the hadith:

“Allah’s Messenger called Ali [and said]: “Proceed on and do not look about until Allah grants you victory,” and Ali went a bit further and …said in a loud voice: “Allah’s Messenger, on what issue should I fight with the people?” Thereupon he (the Prophet) said:” Fight with them until they bear testimony to the fact that there is no god but Allah and Muhammad is his Messenger …” (Sahih Muslim 5917)

Any honest seeker of truth who read this account would agree that the question Ali posed would have been unnecessary had the Muslims been under attack or if the answer to the question was obvious. The reply Ali got underscores the ostensible purpose of all Islamic wars, which is to force non-Muslims into Islam.

There are countless examples in the Koran, Hadith and even history, of how, majority of Islamic wars were clearly religious, and acts of aggression.
Throughout the history of man, and in many great ethical ideologies that great philosophers, moralists and religious men have expounded over time, we have heard them repeatedly say life is sacred and nothing should justify the taking of it. Even Jesus Christ, on countless occasions, taught his listeners to turn the other cheek when slapped, admonishing that those who lived by the sword died by it.

What is holy about war? About taking life, the same life that man is yet to understand how it functions, how much more how to create it.
Yet, in the space of a single life time, we saw man who fought many major battles, led countless raids, planned many military operations, was wounded twice, and yet some would have us believe his is “a religion of peace.”
Historians tell us that the Islamic prophet reportedly spent hours devising tactical and political stratagems, and even remarked that “all war is deceit.”

We know that the Islamic ideology of “holy” war (jihad) and martyrdom (shahada) was transmitted to the West during the later wars between Muslims and Christians, we know this changed the traditional Christian pacifistic thinking on war, and brought into being Christian warrior saints, and provided the Great Roman Catholic Church with its ideological justification for the Crusades. And we know that the crusades were a response to the atrocities of the jihads, especially in the Holy Land.

Today, most West countries continue to make the mistake that the Arab conquests that followed after the Islamic prophet were purely conventional warfare. But the armies that achieved those conquests did not exist in Arabia before him, and he organized them into one large, single religious fighting machine, from the clusters of fighting men, loyal to their tribes and clans that they were.

We know also that, as off shoot of those Islamic wars, Classical Islamic law is intolerant of non-Muslims, offering them the option of conversion or death in extreme cases.

Yet, Islamists argue that jihad was obligatory for Muslims only when they were prevented from exercising their faith, thus restricting it to defensive purposes.

But, from the Wahhabis to modern terrorism, keen followers of Islam and world events know this, among the legacies of the Islamic prophet is still alive today.