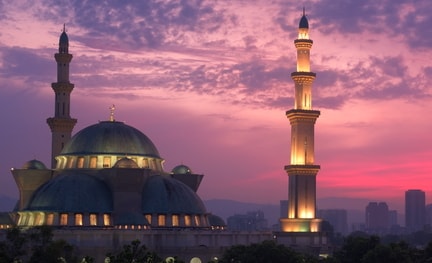 Islamists today would have us believe that Mohammad “was a perfect example of human conduct”.

So much is the respect of Muslims for their Prophet that a month is set aside for ‘fasting’, because, as they say, the man, received his “revealation” in the month of Ramadan.

Well, this is the first of a series with the above title, aimed at examining the Islamic prophet, starting with his private life…

We know that the Islamic prophet mandated his followers to marry a maximum of four wives, especially if such a “believer can love them all equally”.

As a perfect example of human conduct, is it wrong for us to expect the man to lead by example?

Now let us look at the life of the man himself and then as how many wives he himself married.

We start with Khadijah who was Mohammad ‘s wife for 25 years. I wonder why, for 25 years, the man stuck to this older woman. Some Islamists have even tried to have us believe that there is something positive about the fact that Mohammad married and remained faithful to a woman 25 years his senior for that long. But I don’t think so.

Recall that Muhammad ate from what Khadijah earned and that the woman was his benefactor and protector. In fact, when he first saw his “visions” in that cave, the first person he ran to was the woman. Now, imagine what will happen to him if he dared whispered, how much more cheated on the woman…

Aisha bint Abu Bakr was another of Mohammad’s wives who was only 6 years when betrothed to him and 9 when Muhammad, 53, married and consummated the marriage. She was Abu Bakr’s daughter, the first Muslim and the first Caliph. Islamists would argue today that the marriage was political since Abu Bakr definitely was a capable ruler and Muhammad gained a stability when he married his daughter. Now, the question is, a man who married for politics, can we make the case that he was a prophet who was God’s voice on earth?

Sawda bint Zamʿa was the only old woman that was married to Muhammad. She was over 60 and even gave up her “bed time rights” with Muhammad to Aisha rather than divorce him.

Hafsa bint Umar, was a widow of Khunais ibn Hudhaifa, and she married Muhammad at 20 years old. History tells us that she was beautiful and pious. There are those who have argued that, like most of his wives, her beauty was among the major reasons why Muhammad married her.

Zaynab bint Khuzayma was 25, beautiful, a widow and Muhammad’s wife, although she died quickly, in fact, she was married to him for just a mere eight months.

Hind bint Abi Umayya, was a 32 years old widow. She was beautiful, knowledgeable and wise.

One would notice that Muhammad only collected the most beautiful young widows, while his followers made do with the countless not so blessed widows that resulted from the countless wars he instigated and led.

Rayhana bint Zayd, a beautiful Jewish slave was taken after the war with Banu Qurayza. Some Islamists say she was given choice: either to convert and become Muhammad’s wife or become his slave. Now, the question is, what option would a smart woman of her type have chosen? And why did Mohammad spare her in the first place, why did he even give her such a choice at all? So much for those who argue that the man never own or traded in slaves…

Zaynab bint Jahsh, was Muhammad’s own cousin who was married to Muhammad’s adopted son Zayd. It was told that “Zaynab seduced him and Muhammad fell into her charm”. Afterward, Muhammad claimed that Allah told him to make adoption invalid, so he could take Zaynab as his wive after forcing Zayd, his adopted son, to divorce her. The story of how this whole episode transpired and how it found its was into the Koran as a “revealtion” is well known to truth lovers.

Juwayriyya bint al-Harith was a captive from Banu Mustaliq. Records have it that her beauty was profound, so much so that Muhammad refused to release her, even after her father offered ransom. “Muhammad proposed to her afterward and she accepted”. After her acceptance, more than 100 captives from her tribe were released in exchange for her, making her marriage a barter deal for saving her clanmates.

Safiyya bint Huyeiy Ibn Akhtab, was also a very beautiful 17 years old daughter of the chief of the Jewish tribe Banu Nadir. She was very beautiful, so that it was recorded that even Aisha became jealous of her. Muhammad proposed her, and her refusal would have made her a booty for his men who did many horrible things to women of her tribe during and after the war. If she had not chosen
marriage to Mohammad at that time, what would have been her fate?

Ramla bint Abi Sufyan (Umm Habiba), was a very zealoous believer of Islam. She held on to her believe even when her husband was slow to convert. She was strong willed also. Muhammad quickly married her after her husband’s death.

Maria al-Qibtiyya, also known as Mary the Copt, was an Egyptian slave that was given to Muhammad when he threatened Egyptian rulers to accept him as prophet or else he would a war. She was delivered to assuage Muhammad and deflect his attention elsewhere and the tactic worked since Muhammad then re-focused his attention to Persia instead. She was then sent to Hafsa, another wife, as maid.

Maymuna bint al-Harith, was another woman whose marriage was political, to appease Muhammad’s longtime ally, Abbas, and his former enemy, Banu Makhzum. Of course her beauty was an icing in the cake and also a favour to consider for Mohammad.

These are the generally accepted wives of the Islamic prophet, asides his concubines and sex slaves, which the Islamists today, even though records confirms, continue to deny.

Apart from just two, all of Muhammad’s other wives were very beautiful and young women compared with his age when he married them.

This would leave one wondering what Muhammad’s motivation was in marrying these numerous women.

Recall that Jesus Christ, the founder of Christianity and the saviour of the world was never married, and never fought a war or took a life. He even said ” I come to do the work of my father” not to take women in marriage and kill people or instigate wars, or threaten rulers and whole people.

Next, we will look at his life as a Warrior…

Enough Of Talking And Countless Youth Summits, It Is Time For Action
Muhammad: The Warrior Prophet