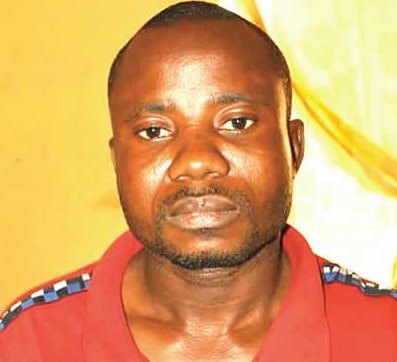 Police yesterday arrested a 31-year-old man, Adelowo Adedayo, for allegedly killing and burying another man, Abdullahi Liman, in shallow grave in Niger State.
The incident occurred in Suleja on January 16, 2019.

The suspect was apprehended by a team of policemen attached to the B Division, Suleja based on information received from family of the deceased. The information led the police to APC Quarters, Suleja in Suleja Local Government Area.

It was learnt that the suspect murdered the victim in a cold blood, buried him in a shallow grave behind his house at the APC Quarters in Suleja and made away with his belongings which included a set of chairs, LG Plasma television, mattress, three pairs of shoes and two travel bags containing clothes.

While responding to questions, the suspect told our correspondent that he killed his victim so that he would have all his house property for himself.

“I have been planning to steal his household items for the past six months. Unfortunately the day I went to his house he was in. I thought he had gone out but the only option left for me was to kill him and save myself from shame.

“His house was well-equipped with what it takes to live in a house and I wanted to have them without his consent. But when I met him at home, I had no choice than to kill him so that he will not expose me to people.”

Adedayo, who did nothing for living, confessed to have committed the murder.

He added: “I regret my action. Let justice take its cause I am ready to face the consequences.”

The state Police Public Relations Officer (PPRO), Muhammad Abubakar, said the suspect in the course of interrogation confessed that he murdered his victim and buried him in a shallow grave behind APC Quarters in Suleja.