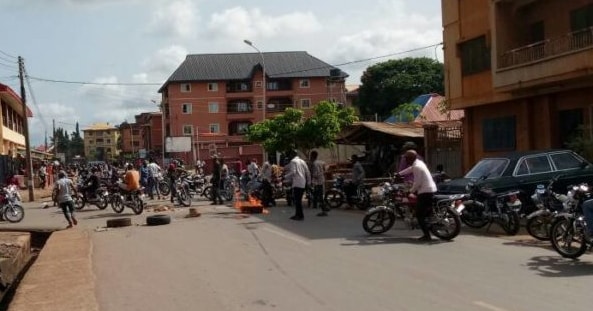 A man identified as Simon Ugbala, at Onyikwa Nkaleke, Ozibo community in Ebonyi Local Government Area of Ebonyi State has killed his wife, two children and six others.

Four others he also attacked were in critical condition and were receiving treatment at the Accident and Emergency Unit of Federal Teaching Hospital, Abakaliki (FETHA).

35-year-old Ugbala, suspected to have mental illness, attacked several people with machete on Monday before youths of the area went after him. But he ran into the bush.
There were fears in the community on Monday night that the man might resurface in the middle of the night and continue the attack.
Residents hurriedly went to bed and shut their doors and gates.

Ugbala reportedly killed seven people on Monday. But yesterday morning, there were reports that the man ambushed school children and killed two of them, bringing the number of people he killed to nine. Parents, who heard the incident, hurriedly withdrew their children from schools.
When contacted, the state Police Public Relations Officer (PPRO), ASP Loveth Odah, confirmed the incident.

Odah said the police were aware of the killing of seven persons by the suspect, among them his wife and two children.

She said: “On 21st January 2019 about 2pm, a councillor from Ebonyi Local Government representing Onyikwa Ward, Mr. Friday Nwigube, came to Kpirikpiri Police Station and reported that Ugbala Simon of about 35 years suspected to be insane went about inflicting machete cuts on people.

“A combined team of detectives rushed to the village where they found several persons with deep machete cuts. They were rushed to the Federal Teaching Hospital, Abakaliki, where seven of the victims were confirmed dead by a medical doctor. Four others were still receiving treatment but on critical condition. Police detectives and youths of the community are presently looking for the man.

“You are talking about disorganising the community, yes! When seven persons are already dead and two others are in critical condition, what do you expect? Police are there and since yesterday (Monday) morning they have been there. The youth of the community are also helping the police to ensure that this person is arrested.”

Homeless Man Sentenced To Death In Lagos For Killing Co-occupant Of Uncompleted Building
Murder At APC Quarters In Suleja Niger State: Robbers Kills Home Owner, Buries Him At His Backyard