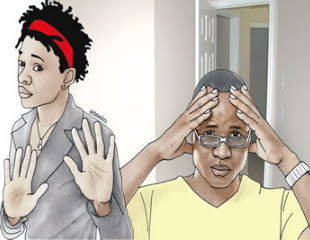 An Alimosho Customary Court in Lagos on Wednesday dissolved the five-year marriage between Mrs. Fausat Umar and her husband, Abudu Umar, over the respondent’s failure to appear in the court.

The President of the court, Alhaja S. O. Mumuni, in her judgment, said that it was obvious from available testimony and the respondent’s refusal to appear in court that the marriage had hit the rock.

“Throughout the duration of this case, the respondent refused to honour court processes, therefore, the court has no other choice than to dissolve the marriage.
“The marriage between Fausat Umar and her husband Abudu Umar is hereby dissolved from today in accordance with the Lagos State Customary Law, 2013, Cap.19.

“Both parties are no longer husband and wife, they are free to marry any partner of their choice, without any hindrances and molestation,” she said.
Fausat, 35, businesswoman, had approached the court to end her marriage which did not produce any child, claiming that her husband was “a chronic and incurable flirt”.

She also accused Abudu of adultery.
“My husband is a flirt, he runs after anything in skirt. In fact, he is addicted to women and always behaves as if he is cursed.

“I am always afraid to travel because if I travel, my husband will bring women of different sizes and colours into our matrimonial bedroom.
“On many occasions, I have met women in my bedroom and they will even be threatening me to leave my husband for them.

“He always receives series of love text messages and calls his lovers at odd hours.
“Anytime, I confronted him with those text messages, he always tells me to leave if I cannot accommodate them,” she told the court.

The petitioner said that she packed out from her husband’s house on March 11, 2015, due to his (Abudu’s) “shameless attitude”.

“I packed out of my matrimonial home March last year, on that very day, one of his concubines packed in.”
According to her, her husband does not care for her, adding that he only cares and send money to his lovers.

She, therefore, prayed the court to dissolve her marriage.

Continue Reading
You may also like...
Related Topics:chronic, flirt, husband

I Married A Man I Didn’t Date, How Prayer, Weight Loss & Attitude Change Saved My Marriage
Refund All The Money I Spent On You Since 2013 – Jilted Husband Tells Wife In Court