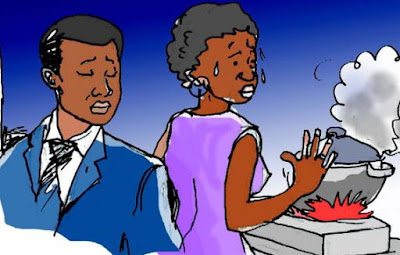 40-year-old  Olarewaju Osasanya today told an Ikole Customary Court, Ekiti, that he could no longer cope with the foul smell from his wife, Kafayat, due to her dirty ways of living.

“My wife is very dirty to the extent of packing used baby napkins with faeces for days in the house without washing them and this made everywhere in the house to smell.
“Again she doesn’t know how to cook food, always cooking tasteless meals and will never take to correction on her dirty habit.
“Above all, she does not care for the well-being of our two children as a responsible mother should be doing,” Osasonna said.

The petitioner further informed the court that his estranged wife was in the habit of cursing him and his family members whenever they had misunderstandings.

He, therefore, prayed the court to dissolve the seven-year-old marriage for alleged dirtiness and inability to prepare decent meals.

He also urged the court to award to him custody of the first child and promised to pay N3,000 monthly upkeep for the second child.

Kafayat declined to cross-examined her husband and said she would state her own side of the story when she testify.

The President of the court, Mrs Yemisi Ojo, adjourned the case till Oct 11, for the testimony of the wife.

11 thoughts on “My Wife Is Dirty, She Doesn’t Know How To Cook – Husband Slams Wife Of 7 Years”