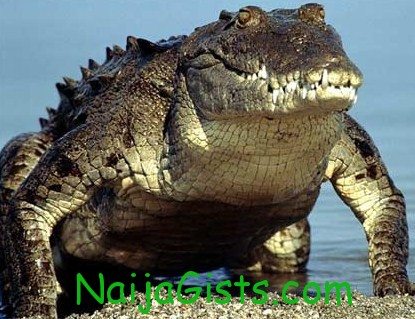 This mystery creature (crocodile) according to reports have taken a permanent abode in an uncompleted building in Ikotun / Igando area of Lagos State Nigeria. naijagists.com

According to an eyewitness report, the crocodile behaves in a mysterious way and often like human.

Several residents have been attacked and wounded by the crocodile.

All efforts to eliminate the creature has proved abortive.

Some of the residents told the News Agency of Nigeria on Saturday that the reptile had lived in the area for 15 years and had constantly been tormenting them.

“Honestly, we are tired of this crocodile. It has been around for some time and comes out from God-knows-where during the rainy season into the flooded streets to attack us.

“A number of residents had been attacked and seriously wounded by this animal. Only a fortnight ago, it was spotted swimming toward a school boy playing in the flood.

“If not that some adult residents rushed to the scene and rescued the boy, it would have been a different story. Honestly we are tired,” said a resident, Mr Alabi Rabiu

Another resident, Babatunde Alabi, said the crocodile had made the residents to live in perpetual fear.

According to him, the reptile has chosen a permanent habitat in an uncompleted building in the area, making it difficult for residents to move freely.

Pointing at the abandoned building sitting on a swamp, he said, “That is where it lives, everybody knows but nobody dares goes there.

“Some people have made attempts to get rid of it without success. The animal is feared by everyone. We need the government to help us,” he said.

According to Alabi, the crocodile once lived in a nearby canal from where it swam into the community and had remained there.

Another resident, Mrs. Atinuke Adewale, said the reptile was unusually huge and behaved in a mysterious way.

She said that she had twice seen the animal swimming on Okeowo Street, which was always flooded and could not stand the sight of its huge size and the way it behaved.

“I have seen it twice. It is real. It is so big that I got confused if it was actually a reptile. It would swim back and forth and make a scary noise.

“I could not watch it for too long. I was scared. I have never seen or heard anything like this. It just looked scary,” she said.

Another resident, Mr. Adeyemi Oke, said once a solution was found to the problem of perennial flooding in the area, the problem posed by the animal would be solved.

He, therefore, urged the Lagos State Government to come to their aid by building new drains in the area, into which the floods could be channeled.

We are also calling on the government to help us to tar the roads. Because of the floods, we cannot move freely to other communities.

“Joshua Okeowo Street is a link road to Abaranje, but we can’t access the place directly because of the floods. We want the government to help us,” he said.

Commissioner for the Environment, Mr. Tunji Bello, who monitored the monthly sanitation exercise in the area, said that the government was already taking steps to solve the flooding problem.

He said the Ifelodun and Potoku canals in the area were being expanded to take care of the floods.(NAN)

Lagos state government should do something before this bizarre creature cause further havoc.