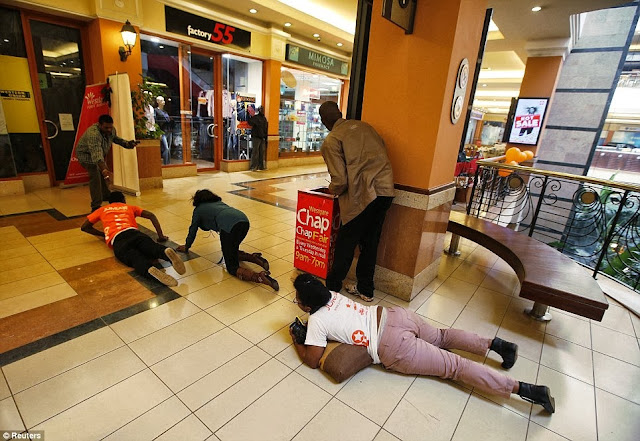 It all started on Saturday when some gunmen stormed the upscale shopping in Nairobi.

As we speak the death toll has jumped to 68 while as many as 175 were reported injured.

Here is details of the current event in Nairobi Kenya;

Update, Sept. 23 at 2:30p.m.: The death toll from the attack on the upscale Nairobi mall has now increased to 68, according to the Kenya’s Red Cross. In a statement, the Red Cross said nine more bodies were recovered Sunday in a joint rescue mission. Meanwhile, the standoff continues at the four-story mall, where anywhere from 10 to 15 militants continue to hold hostages, reports the Associated Press.

Update, Sept. 22, 10:30 a.m.: Twenty-four hours later, the siege at the upscale Nairobi mall continues. Islamist militants are still holding hostages and the death toll has increased to 59 people, with at least 175 people injured in what is already Kenya’s worst terrorist attack since the 1998 US Embassy bombing in Nairobi, where more than 200 people were killed. On Sunday, there were “sporadic gun battles” at the mall as Kenya security forces tried to free hostages with little sign that the attackers were willing to negotiate, reports the Associated Press.

The assault by the al-Shabab terrorist group was a reminder of how al-Qaida’s proxy in Somalia is able to carry out major attacks with limited resources, points out Reuters. Al-Shabab quickly claimed responsibility for the attack, detailing on its Twitter account (before it was suspended) how it escorted “all Muslims” out of the mall that is popular with wealthy Kenyans and expatriates before the attack began, notes CNN.

The Washington Post and CNN say there are many as 30 hostages still inside the mall, citing Kenyan government officials, although other outlets emphasize the number is far from clear. Kenya’s Red Cross has said that 49 people have been reported missing.

“I am aware that many have expressed impatience over the pace at which the situation is unfolding,” President Uhuru Kenyatta said in a speech to the nation Sunday, “and while I empathize with your anxiety at seeing the matter concluded as quickly as possible, I ask also for understanding.” Kenyatta said his nephew and his fiancée were among those killed in the mall, making it clear he took the attack personally. “These are young, lovely people I personally knew and loved. Many of us have lost loved ones,” Kenyatta said.

The New York Times gets its hands on a United Nations security report issued Saturday that described the attack as “a complex, two-pronged assault” that included two separate squads of gunmen. The attack is seen as a particular failure of Kenya’s security forces that were not able to detect an operation that likely took months to plan. At the same time, it seems Western security agencies also failed to pick up hints of the attack.

Security experts had reportedly long warned that the Israeli-owned mall was at risk of a terrorist attack, reports the BBC.  Indeed, the Post says many Kenyans and expatriates had long voiced these concerns as well. Reuters hears word that Israeli advisers were at the scene Sunday helping Kenyan security forces end the standoff.

There were several foreigners among the confirmed dead in the Westgate mall. At least three British nationals died and the number is expected to rise, Prime Minister David Cameron said. The AP says confirmed victims also include people from Canada, France, South Africa, Ghana and China. Although U.S. citizens were injured, it does not seem any were among the dead yet.

Sept. 21, 3 p.m.: As the death toll reached at least 30, with 100 injured, Somali militant group al-Shabab claimed responsibility for the attack on the upscale Nairobi mall Saturday. On its Twitter account, al-Shabab said it was behind the attack and as expected, said it amounted to a retaliation of Kenya’s decision to send forces to Somalia in 2011. “What Kenyans are witnessing at #Westgate is retributive justice for crimes committed by their military, albeit largely miniscule in nature,” reads one of the Twitter messages. The group insisted “there will be no negotiations whatsoever” at the mall. (Slate’s Will Oremus has written about al-Shabab’s use of Twitter.) Officers are still searching the premises for the attackers, whom are believed to be holding as many as 36 hostages, according to CNN.

The State Department said it has received reports of U.S. citizens being injured in the attack but  did not release any further details, reports the Hill. Meanwhile, the BBC’s Frank Gardner says the Westgate attack is similar to the Mumbai siege of 2008, when numerous low-profile targets were attacked with the goal of killing as many civilians as possible. “That prompted a complete rethink in counter-terrorism in Britain, with the realization that the UK was unprepared at the time for such a determined attack,” writes Gardner.

Original Post, Sept. 21, 1 p.m.: A group of gunmen stormed into an upscale shopping mall in Nairobi, Kenya that is popular with the city’s large expatriate community Saturday. At least 22 people were killed in what seems to be a terrorist attack, reports the Associated Press. There is no official word yet, but witnesses say the gunmen told Muslims to leave and that only non-Muslims would be targeted at the Westgate mall that was hosting a children’s day event. Hours after the assault began, soldiers and police were still searching the mall for the attackers and a police officer tells AFP that at least seven people had been taken hostage.

Police immediately said they suspected this was a terrorist attack with witnesses reporting that around five assailants were involved, according to Reuters. “They don’t seem like thugs, this is not a robbery incident,” said a witness. “It seems like an attack. The guards who saw them said they were shooting indiscriminately.” Suspicion immediately fell on Somali militant group al-Shabab that had previously threatened to carry out a large attack in retaliation for Kenya sending troops to Somalia to fight al Shabab militants in 2011.

Long considered “a beacon of stability in an often unstable region,” as the New York Times puts it, Kenya has become increasingly affected by the chaos in Somalia.

Here are some photos of the attack scene 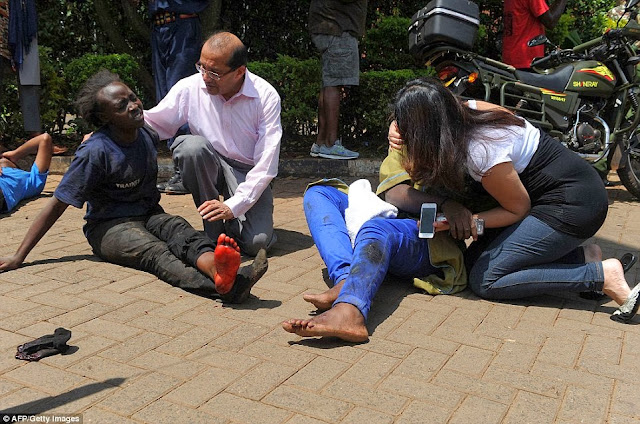 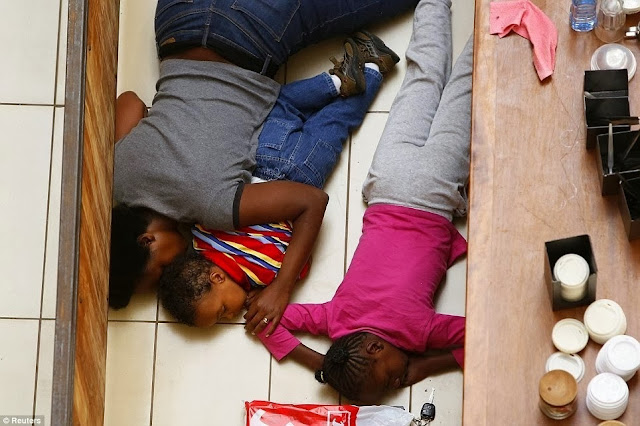 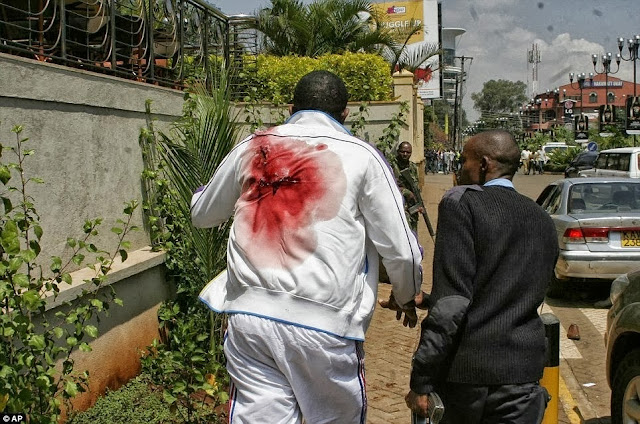 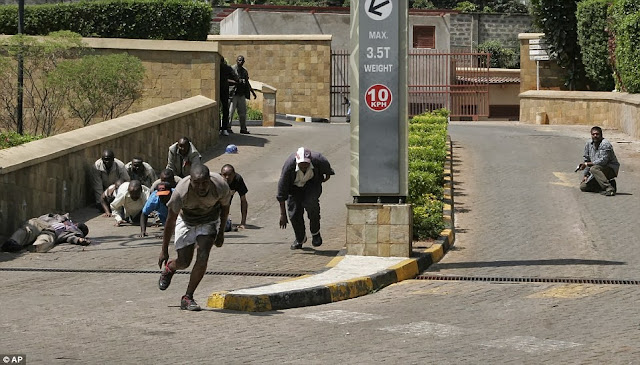 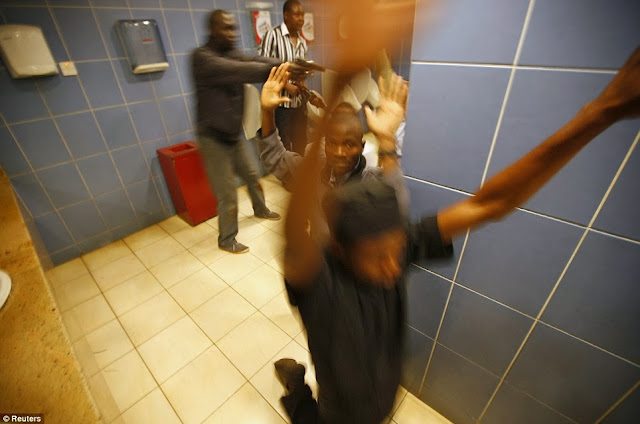 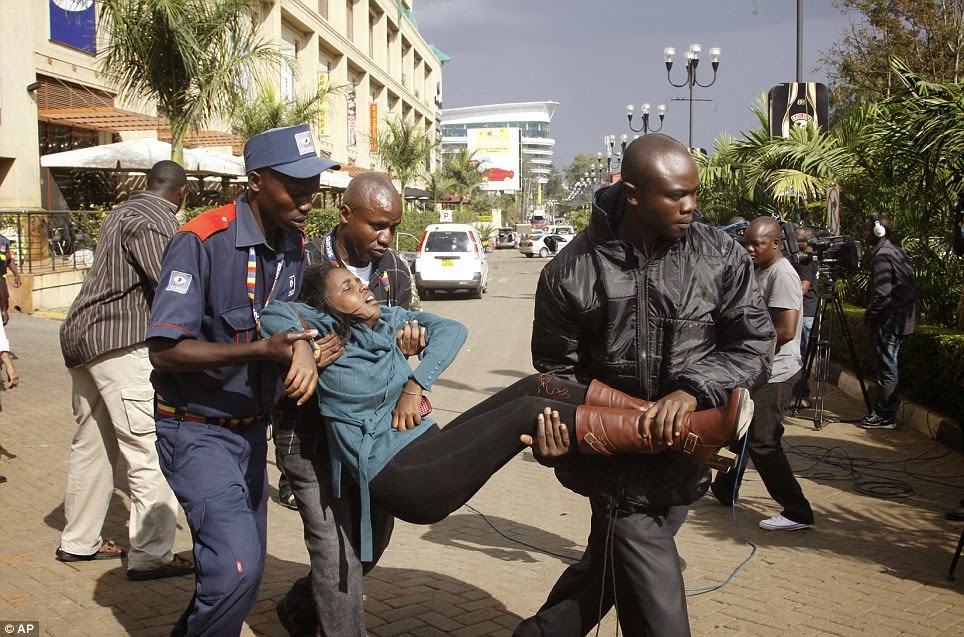 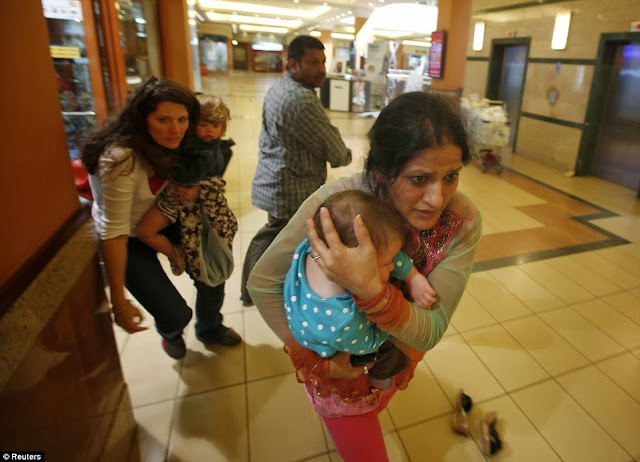 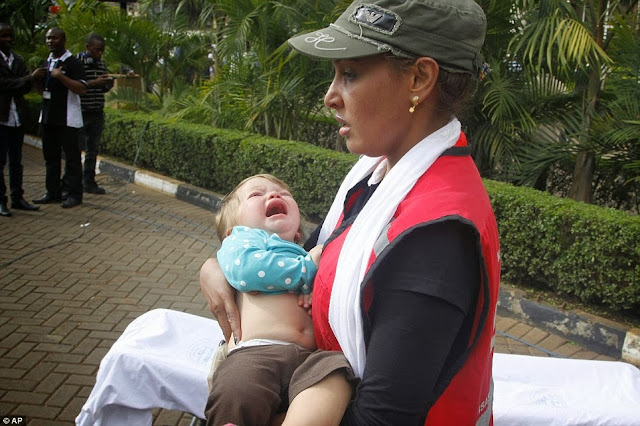 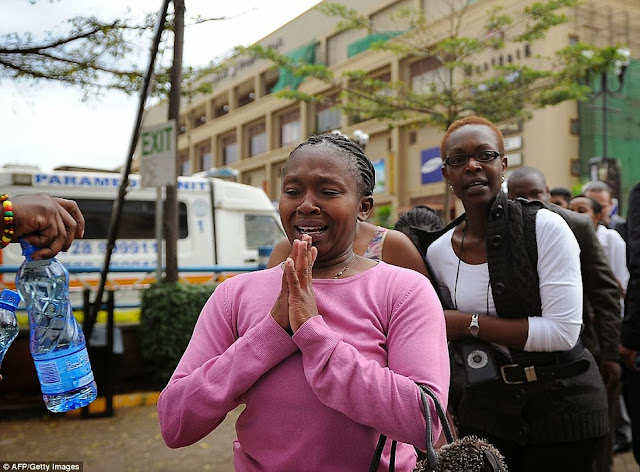 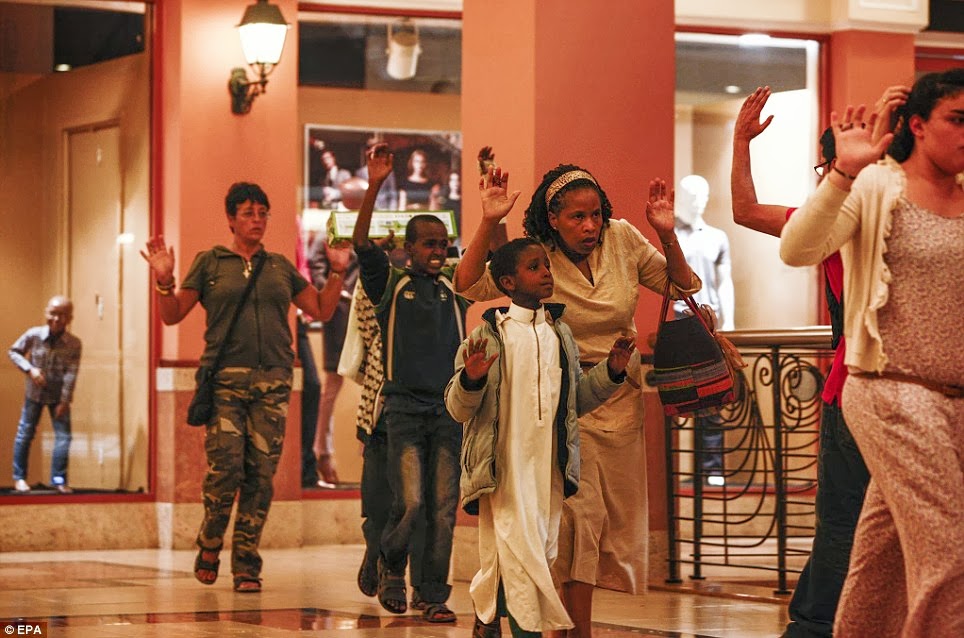 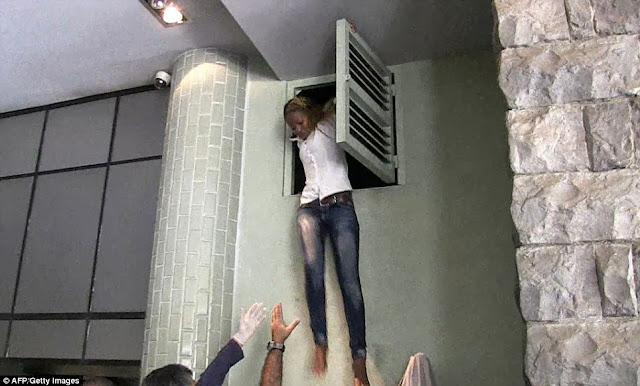 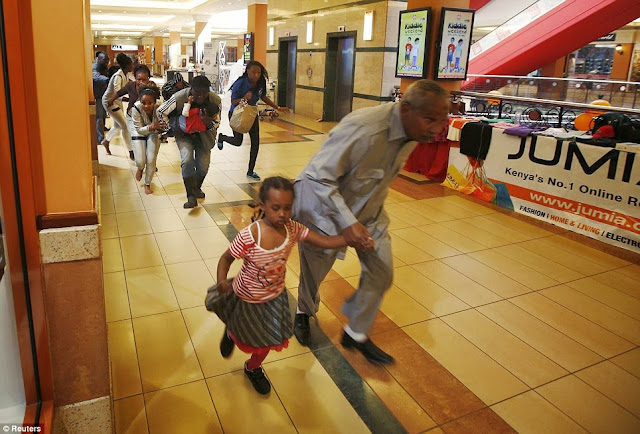 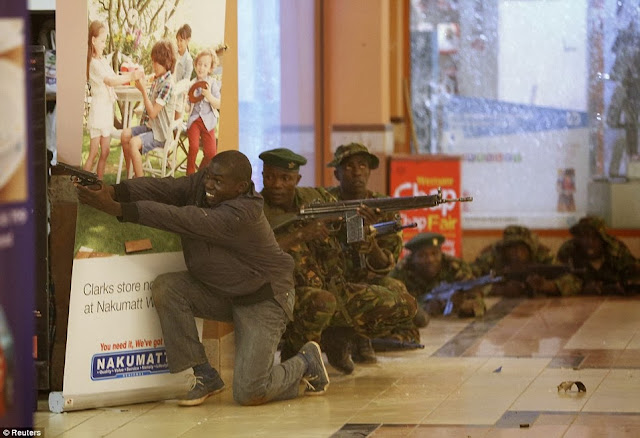 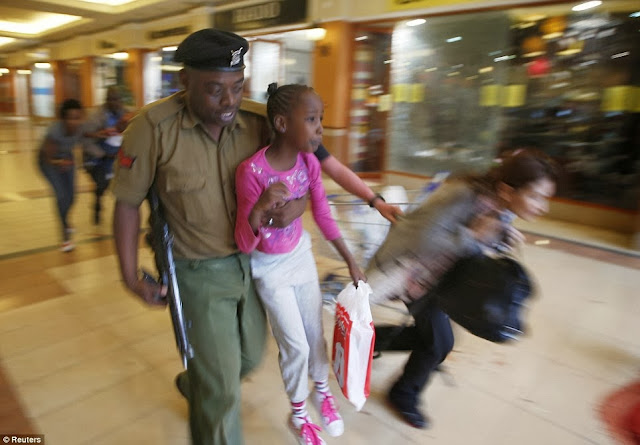