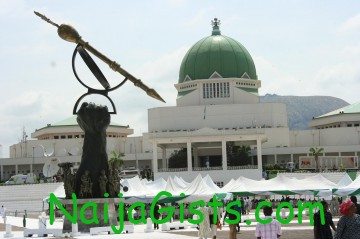 Fire broke out Thursday afternoon on the second floor of the National Assembly annex building.
The fire started in the legal department and accounts departments of the National Assembly Service Commission.
The News Agency of Nigeria reports that the FCT Fire Service deployed two fire engines to bring the fire under control before it could spread to other offices.
Panic-stricken staffers, who had vacated the building, gathered some distance away to discuss the incident.

The Director of FCT Fire Service, Mr. Sani Saidu, who confirmed the incident, told journalists that the fire incident was caused by power outage as a result of power fluctuation.
He said the situation had been brought under control and no damage was done
“It was caused by electrical fault as a result of power fluctuation. It was brought under control. No damage was done,” he said.
There was a similar fire incident at the National Assembly Annex on February 21, 2011, on the ground floor which was also said to have been caused by an electrical fault.
There was also a fire at the same annex building two months ago. The fire began in the office of the Secretary to the Clerk of the National Assembly on the third floor of the main building around 1p.m.
The National Assembly is currently on a one-week recess. (NAN)