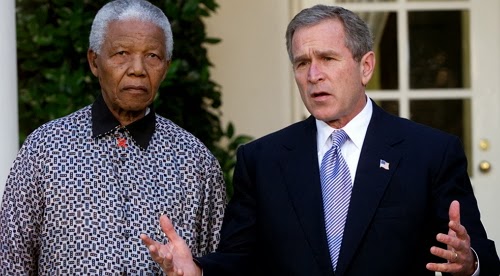 Dec 6, 2013 – Nelson Mandela Removed From US Terrorist Watch List In 2008 By President Bush

As a popular human right activist before his death, Nelson Mandela was place on the U.S. terrorism watch list until 2008, when then-President George W. Bush signed a bill removing him from it.

Then-Secretary of State Condoleezza Rice called the restrictions a “rather embarrassing matter that I still have to waive in my own counterpart, the foreign minister of South Africa, not to mention the great leader Nelson Mandela.”

“He had no place on our government’s terror watch list, and I’m pleased to see this bill finally become law,” then-Sen. John Kerry (D-Mass.) said in 2008.

South Africa’s apartheid regime designated Mandela’s African National Congress (ANC) as a terrorist organization for its battle against the nation’s legalized system of racial segregation that lasted from 1948 to 1994.

In 1986, former Vice President Dick Cheney, then a congressman, voted along with 179 other members of the House against a non-binding resolution to recognize the ANC and call on the South African government to release Mandela from prison. The measure finally passed, but not before a veto attempt by Reagan.

In 2000, Cheney maintained that he’d cast the correct vote.