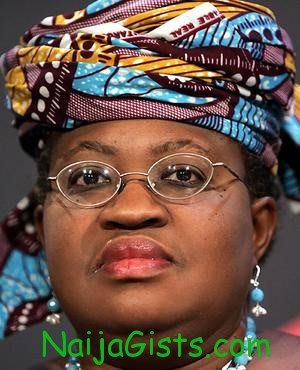 Okonjo-Iweala made the request during an oversight visit to her office, by members of the House Committee on Finance.

President Goodluck Jonathan had written the Senate and House of Representatives in February seeking approval for the loans to fund key projects in various sectors of the economy.

“We have an external borrowing plan that we have put to the National Assembly, as we are required to do and I am really counting on your help to get out the borrowing plan as quickly as possible.”

The Minister, said the loan is required to complete some on-going projects captured in the 2012 budget.

She said government will spend the loan on several projects in agriculture, water resources and power.

On the monthly meeting of Federation Accounts Allocation Committee (FAAC), which distributes money to the three-tiers of government, she explained that delay in disbursing funds was not an issue of concern.

She revealed that the federal government is being owed over N100 billion by corporate entities, adding that negotiations were on with the defaulters to resolve the issue.

“We also have more than N100 billion that is outstanding. That is why the number of companies is quite substantial but we are working at this. Government is “not out to just publish names until we have discussed with the companies and use every means to try and persuade them to pay. It is not the arrest that is important but the money that comes in. Our job is not to arrest but to get them to remit the money that they owe.”

The minister noted that a lot of things depend on this external borrowing plan “and until the National Assembly gets it out, all those who want to assist us with soft credit will not be able to do so.”

Most of the credits in that borrowing plan “are mostly soft credits with very low percentage of interest. Some of them are outright zero interest, but with a commitment charge, from the African Development Bank and the World Bank, the Islamic Bank and the other multilateral donors, including China and India. These are people who want to assist us. These resources are very key for our 2012 budget,” she stressed.

The loans when secured will cover a spectrum, mostly “for very productive investments in agriculture, water resources, power and transport.

Earlier, the chairman House Committee on Finance Abdul Mumin Jubrin called the minister of finance to look into the matter of remittances of revenue to government coffers.

All agencies he said are supposed to be remitting revenue to the Federation Account as such there should efforts should be redouble to ensure that whatever is due to the government is remitted.

On the issue of insurance Jubrin lamented that National Assembly looks “at it year after year we are budgeting lots and lots of money for insurance of government property and assets and it is important for us to go out there and review the value of these assets that are being insured and the amount of money that is being paid as premium and see if procedures are being followed in line with laid down rules and regulations.”

He urged the finance minister to conduct “a lot of investigative work in that regard to compliment the efforts of the National Assembly.

Yet another opportunity for top politicians to embezzle more. God dey ooooo