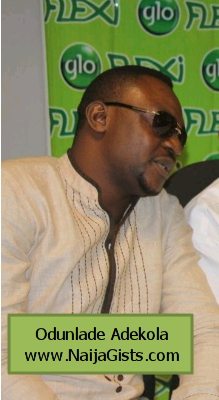 In this recent interview with Jayne Augoye, popular Yoruba Actor and movie producer, Odunlade Adekola speaks up on life as a Glo Ambassador. naijagists.com

When he landed his first movie role in the 1999 film, Saworoja, top Yoruba actor, Odunlade Adekola, made an impressive use of the opportunity. No wonder, within the next few years, he became one of the most sought-after actors in the Yoruba movie world and a constant feature in almost every film.

Late last year, his thriving career received a boost when he was made a Globacom Ambassador, thus becoming the only Yoruba actor signed on to the platform.

It can be assumed that the elevation will affect fees he charges producers but the Moshood Abiola Polythecnic Business Administration graduate insists that very little has changed.

“I don’t charge anybody. The producers know me deeply and know my worth. They know what is commensurate with my status. If I feel the money

I am offered is not sufficient I simply ask them to include fuel money,” he says, laughing.

It has not totally been a smooth ride for the handsome actor as he is constantly a victim of bad rumours. It is impossible to believe that he has grown thick skin to stories about him However, Adekoya, says he takes all that is written about him in good faith. He says, after all “whether positive or negative news at the end of the day it promotes me.”

As the most consistent and oldest movie genre in the country, the Yoruba film industry is plagued with allegations of rivalry, power struggle, fetish practices and feuds. But Adekola, who cut his teeth in acting as a green horn in Christ Apostolic Church Lafenwa, Abeokuta, Ogun State, opines that ‘their’ industry thrives on rumours.

“We all enjoy a fantastic relationship contrary to the allegations flying around but the major issue plaguing our industry is the numerous false stories peddled around by mischief makers. So many things I read are alien to me.”

It is often said that an actor who takes up every role may find it almost impossible to master his or her craft. In this regard, Adekola begs to disagree.

“An actor should be an actor. As such, each script has to be treated differently. Once a role has been internalised, it is very easy to transit from the previous role into a new one. There is no way I can feature in every movie but one thing I can say is that I love acting.”

Today, the Ekiti State, born actor, who has ventured into movie production, says he has lost count of the number of films he has starred in.

While some actors may find it hard to manage fans of the opposite sex, Adekoya says he is as professional as possible with them.

“They are all my friends,’ he says. “I am lucky not to have been involved in any scandal with any one of them. They call me up to acknowledge my efforts but I have never gone beyond that.”

Nigeria To Borrow N1.8 Trillion ONLY
I Have Found True Love – Funke Akindele