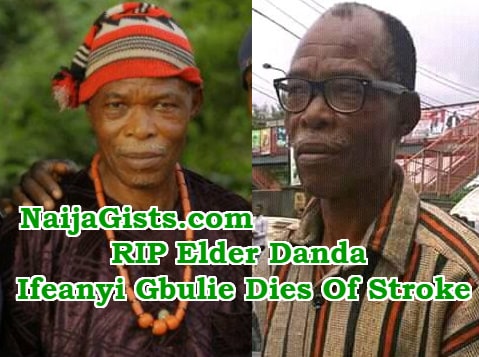 Nollywood has lost yet another icon to the cold hands of death.

Elder Ifeanyi Ikenga Gbulie who is known for playing elderly roles in movies lost his battle to stroke on Thursday the 13th of December 2018.

According to an insider, the native of Nimo passed away in the wee hours of yesterday exactly 12 months after he became bedridden due to stroke.

Popularly called Elder Danda, he became a household name in the early 1970s.

Sadly, throughout the time of his battle, no Nollywood star including the directors guild of Nigeria member, Chima Okoroji who broke the news today solicited for fund on behalf of the actor.

A female Nollywood star based in Enugu said Elder Danda died in pain and survived on the little money his poor family could raise.

Here is what the source exclusively told NaijaGists.com

“Ikenga would have lived longer if these people raised money for him but they didn’t. This industry is not it, I just pray that God accept his soul and give him eternal rest”.

The deceased is survived by a wife and six children.