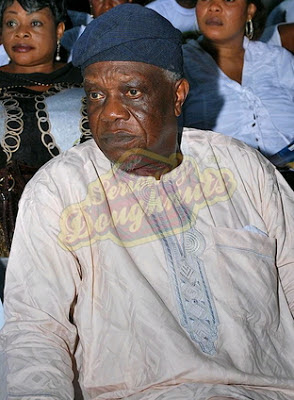 According to family sources, the veteran actor popularly known as Village Headmaster is a loving husband of one wife, father of many children and grandfather.

Justus Esiri who was born in Oria Abraka, Delta state on Nov 6, 1942 passed away last week at the age of 71.

He will be greatly missed. May his soul rest in perfect peace.

We are heart broken as we announce the passing of Chief Justus Esiri OON popularly known as the “Village Headmaster”, following a complication from Diabetes.

Chief Justus Esiri OON, was a loving husband, father, grand father, brother, uncle and friend. An Officer of the Order of the Niger (OON), The Otun Amuludun of the Source in Ile-Ife Osun State, and Veteran Nollywood Actor.

He died in the late hours of the 19th of February 2013. Chief Esiri, born on the 6th November 1942 hailed from Oria Abraka, Delta State. He was a strong believer in family values, and a great supporter of Nollywood.

While we mourn the loss of a great man we also celebrate his remarkable life and hope that it serves as an example to the youth to work hard to achieve their dreams, and play their own part in building a greater nation.

For those who may ask what they can do to honour Chief Justus Esiri, we simply request that you honour his example of service, accomplishment and modesty and the next time you turn on your Television and see his face we ask that you keep his memory alive.

Dr. Sidney Esiri and George Esiri
For the Esiri Family.